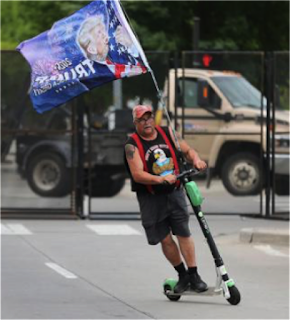 So the latest MAGA spectacle of note was last week's sad pox party in Tulsa, hilariously punked by the unstoppable K-Pop/Tik-Tok axis making Donny a sad boy.  Despite boasting on Twitter that "Almost One Million People" (effed capitalization 45's) had requested tickets for the event, only 6,200 actually showed.

That's still 6,200 pretty messed-up people though.  I'd be happy willing despite a fair degree of discomfort to tell you all about them.  But when the news photos began popping up, showing who some of these folks actually are, I for some reason recalled an old user on mgoblog, BlueSeoul.  Around 2009 or so, BlueSeoul used to post "game wraps" in which he would take screen-shots of fans in attendance and add thought bubbles showing what strange throughts must have been circulating through their skulls at particular points during the game.  (I'd link one but these are, evidently, long gone).  Especially with pictures being worth 1,000 per and all, seems like a valid approach for the Tulsa rally as well.  So enough lame text--let's get to the images.
Okay, so first up we have this marvelous marvel, courtesy of CNN: 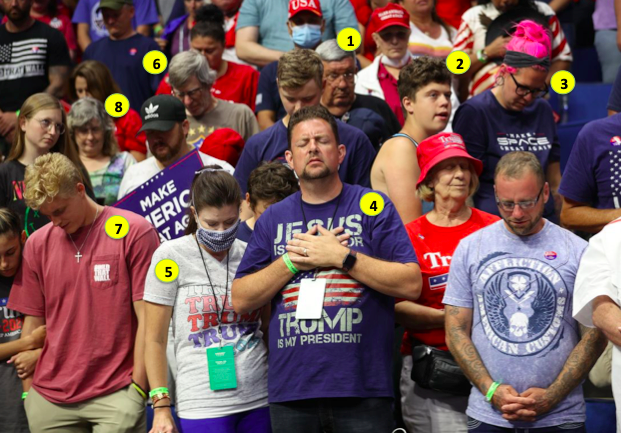 We'll get to the dressed-down Jim & Tammy Bakker disciples front-and-center in a moment, first let's take a look at (1) fake-hair grandpa training his vision on gump kid (2) checking out something off to the left.  What do we think it is?  Don't answer that.  But it must be pretty exciting because at least three people are looking at it.  Side note: lots of people wearing sleeves in this photo.  If not for gump kid one might question whether this was really Oklahoma.
Gump kid's grandma (3) isn't looking left.  She's got her head down, so could be participating in the dubiously religious exercise that seems to be afoot, but probably she's just there because gump kid begged her and now she's just gotta slog through Ann Patchett on her iPhone.  I guess if you'll wear whatever fake Komen Foundation monstrosity gump kid manufactured with old skeins of pink yarn and Elmer's glue, then you can go catch 'Rona for his sake too.  But it's like Marcellus told us, "fuck pride."
So, Jimmy boy (4).  I mean of course he is dead center of the photo.  He's undoubtedly already shared this photo multiple times on all 65 of his social media accounts to ensure that every last one of the 6,187 residents of Paul's Valley, Oklahoma, have seen it.  He has surely printed and framed a copy to post at the entrance of whatever god awful megachurch he attends, where certainly he is regularly featured on screen with his inventive facial hair patterns and ostentatious over-prayer.  Jesus loves you.  I SAID, JESUS LOVES YOU.  Say it loudly enough and you're basically a man of the cloth.
God has been good to Jimmy.  His wife (5) is probably reasonably attractive when not wearing a DT shirt and undoubtedly puts up with his bullshit because obvs.  Sad, really--kind of like in those shows about old medieval times when rich parents would bargain off their daughters to cement business ties or political relationships and divorce didn't really exist.  She caught Jimmy, and is trying to make it work.  At least he doesn't look violent.
Speaking of Elmer (6), you'd think Tulsa keeps the whole toupee industry afloat singlehanded.  Or maybe this guy drove in from Lawton or some shit.  Probably had the windows open all three hours on I-44.  That or it's the real deal and he's just rocking the Covid cut.  Now that would be a happy accident.  Would.
No. 7 (7) has no such problems.  Perfect hair, and blonde to boot.  I'd say that's obviously what the young lady furiously clutching No. 7's right arm is attracted to, but perhaps it's his profound wisdom and clear Christian values.  Yes, that must be it.  Following in the footsteps of Jimmy.
Not sure on Elmer's wife (8).  Do they make toupees for the ladies?  Yes, I know about wigs.  But a wig is an attractive hair pieces--not some hideous rugs you wear just because it looks natural on your head.  That's obviously not a wig.  But it can't be her real hair.  I mean, that just can't be.  Estoy confuso.  The whole "big hair" thing ended almost 30 years ago and ..... wait a minute 😯😯
Alright, I should probably just shut up and post photos.  Here's the rest of them. 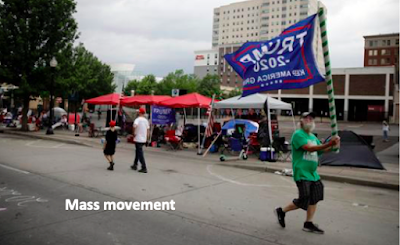 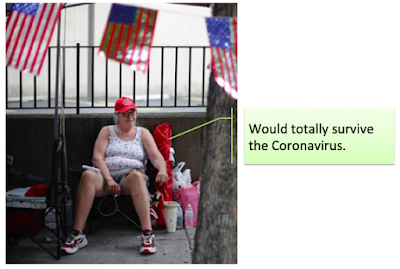 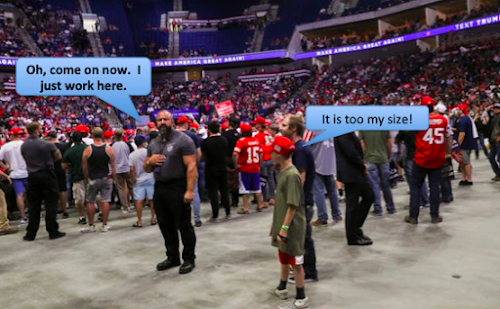 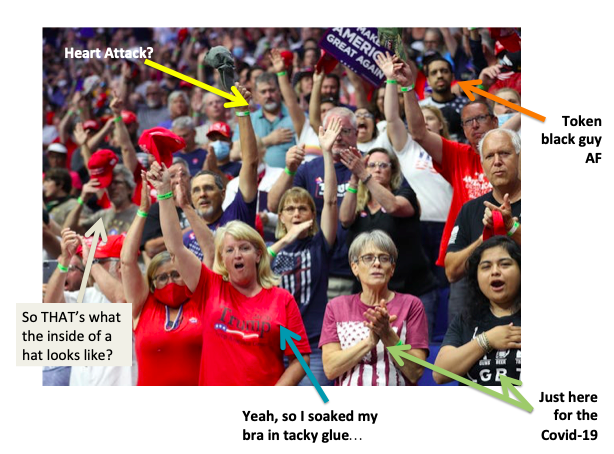 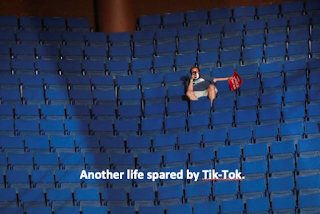 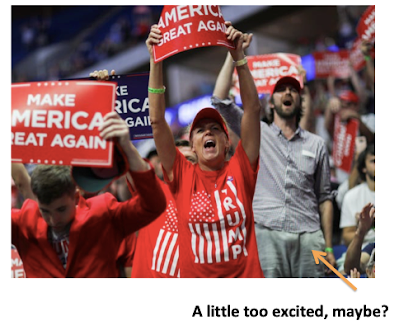 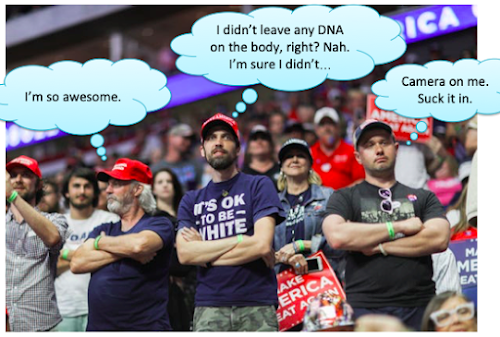 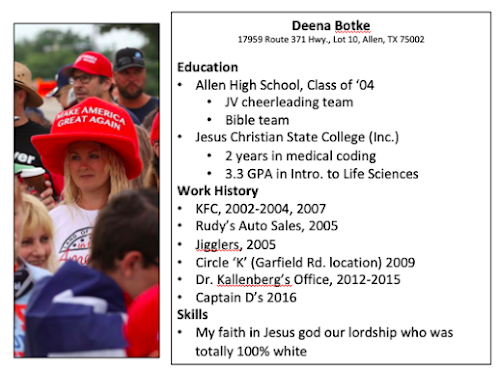 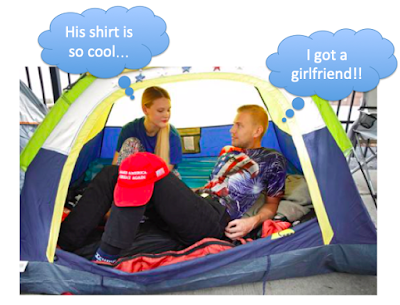 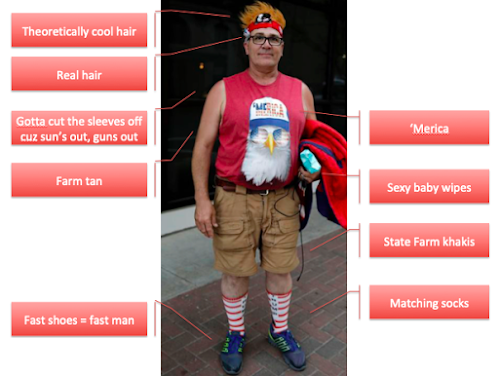 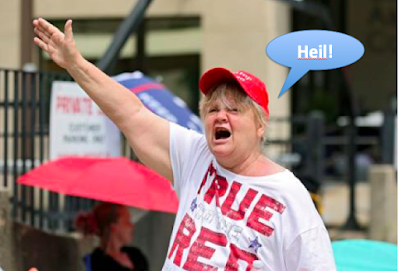 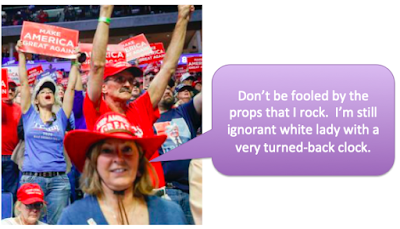 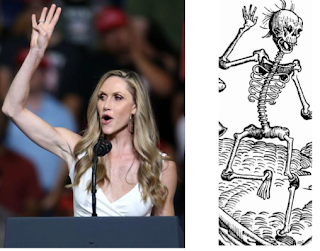 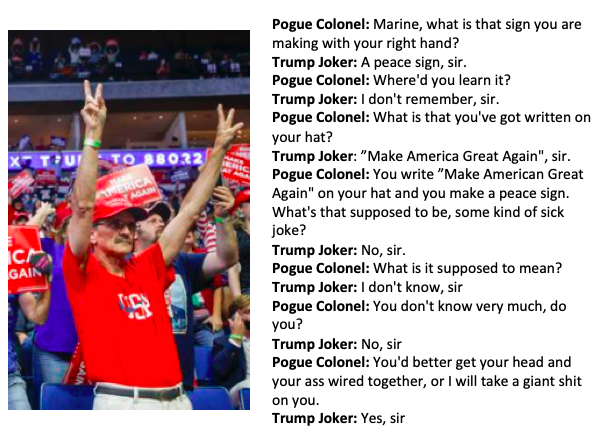 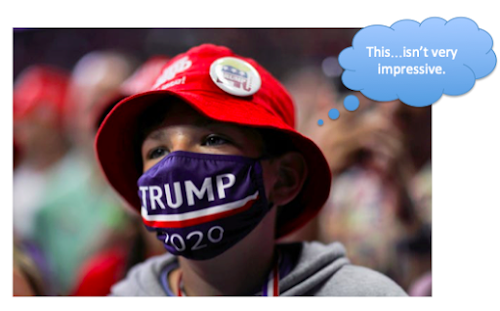 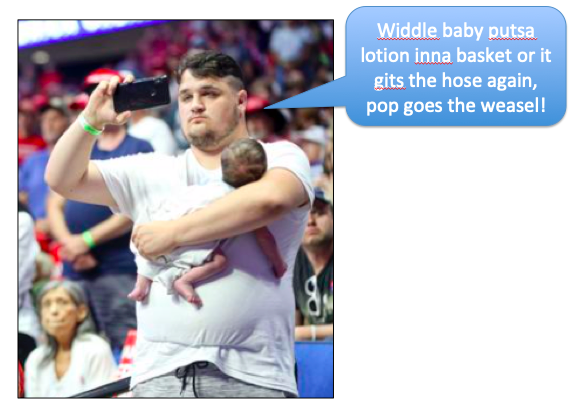 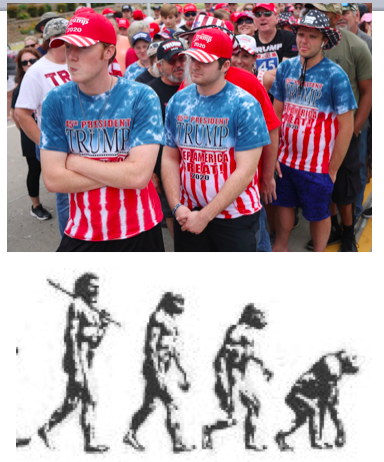 
Not many people outside of the Pacific Northwest have ever heard of Arlington, Washington.  No reason to, really--it's just a random small town along I-5 north of Seattle that you pass through on your way up to Bellingham or Vancouver.  Not the kind of place you'd expect to find a U.S. presidential candidate visiting in the crunch time before the general election.

That's why many MSM political experts found it odd that Donald Trump held a campaign rally in Arlington in the middle of August 2016.  Why even go to Washington at all, some wondered--a state DT had no realistic hope of winning, or even forcing his opponent to invest in.  And if Washington, why Arlington, and not at least visit a city with a significant population.

While national pundits scratched their heads, to Pacific NW locals the visit to Arlington was no mystery at all.

Militant white supremacists have long dreamed of establishing a white "territorial sanctuary" deep in the Pacific NW.  Through this idea, which they call their "Northwest Imperative," white supremacists have been encouraging their members to move to the area since the 1970s.  Many have done so, and while some have polluted the population centers like Portland and Seattle, a great many settled in remote towns in rural Washington and Idaho.  Like Arlington.  And DT visiting Arlington was a signal to his base--his real base, the white supremacists--that he was their guy.

That's not what the local Republicans interviewed at the time of the visit said, of course.   The visit was just about DT "keeping his word" after having promised to return to the area earlier in the campaign, they suggested, or supposedly building in-roads into Washington State.  There was some nonsense about "Snohomish County is the Ohio of Washington State."  But that was all just window dressing for outsiders.  The locals knew what the visit was really about, even if they couldn't necessarily prove it.

The same lame explanations were trotted out after the Republican National Convention, when shock-jockette Laura Ingraham threw up the Nazi salute at the end of some god-awful speech.  "She may have simply intended to finish her speech with ... a wave, followed by a point," wrote a Slate columnist, "but in her excitement (or, perhaps, as a result of over-rehearsing the movement ahead of time) she combined the two, resulting in the open-handed, palm-down point."  No, she gave the freaking Nazi salute.  We all saw it.  But for some reason, the benefit of the doubt must be given?

When white supremacists gathered for their "Unite the Right" hate-fest in Charlottesville, Virginia, in 2017, DT called them "very fine people"--even as they murdered a counter-protestor.   Yet he did it saying there were supposedly fine people "on both sides," enabling those so inclined to give DT a pass for having decided just to not take on white supremacy that particular day.  This was insanity, of course--the thought of a sitting U.S. president referring to white supremacists as "very fine people" ought not be found acceptable under circumstances, no matter how oblique the reference (and this reference was far from oblique).  But to those who insist there must be multiple sides to every story, hey--at least he didn't literally say that he agreed with the UTR marchers.  But we all know he did.

And what about the MAGA hats?  They just happen to be red, right?  It's not as though there is an actual swastika on the hat, or confederate flag, or whatever that KKK symbol is.  As with an unusual campaign rally in Arlington, Washington, there's enough plausible deniability to suggest that anyone comparing the MAGA hats with, say, brownshirt armbands is being ridiculous.  Facebook even banned and disabled the account of an artist for making that kind of comparison last year.

By now, of course, the thought of DT making a subtle gesture such as that seems absurd; this is a guy who just yesterday declared anti-fascism a terrorist group, gushed like a sports fanboy about secret service agents assaulting protestors outside the White House, urged governors to "do retribution" against people protesting police violence, and threatened to unleash the U.S military on people if, I guess, he isn't satisfied with the bloodshed.  This is long after imposing a Muslim ban, referring to immigrants from Latin America as rapists and criminals, and making countless other openly offensive statements and pursuing openly discriminatory policies.

What, then, should be be the response to DT's latest stunt--in which he had a group of peaceful demonstrators forcibly removed from in front of a Washington DC church so that he could have his picture taken there, and in which the resulting picture was a near-perfect replica of der Fuehrer holding a bible in his right hand with an uncommon vertical grip: 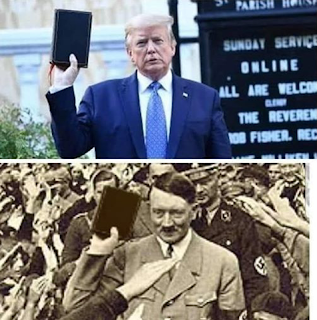 Undoubtedly there will be some who say this is another mere coincidence, that DT could not possibly have intended to emulate this Hitler photograph, and pitch various other contrived explanations.  But sometimes the real explanation is just the most obvious one.  And DT has long since forfeited any benefit of the doubt.