It wasn't quick and it wasn't comfortable, and somehow 73 million people voted for the white supremacist fascist candidate.  But we did it, U.S.A.  Almost 79 million showed up or sent out to reject the Orange Mussolini, good for 306 electoral votes, and so we'll have a new jefe come 2021.  The only questions now are (1) how much damage the clown-in-chief will be able to do on his way out the door, and (2) whether the Dems can pick win the two Georgia runoff elections necessary to deliver a 50-50 time in the Senate and effective control with the Kamala Harris tiebreaker.  She definitely needs to be speaking, yo.

We all went to bed a tad nervous on Tuesday night (really, Wednesday morning), with the trumps having shown out to their pastoral polling places in depressingly large numbers.  But by Thursday morning, things looked to be falling into place as states slow to count mail-in ballots and urban precincts in Michigan, Wisconsin, and Georgia plowed through their votes.  By Friday, when Biden took the lead in Pennsylvania, it was all but over--and there was no question who had delivered this election to the Biden/Harris ticket.

The story was much the same with Black population centers in the other key battlegrounds.  In Georgia, over 83% of DeKalb County (over 54% Black) voters favored Biden, almost 73% of Fulton County (44.3% Black), and nearly 60% of Gwinnett County (23.6% Black).  But most moving were voters in Clayton County (51.5% Black), home of the late civil rights icon John Lewis; 85% of voters there cast their ballots for Biden/Harris, and poll workers there worked overnight to count votes so Clayton County could be the district that turned Georgia blue.

In Pennsylvania, Philadelphia County (43.2% Black) alone delivered over 584,000 votes to the good side against fewer than 130,000 to the bad, and other Philadelphia-area districts proved decisive in Biden's favor.  Among these were Chester County (the fourth-Blackest U.S. jurisdiction), which Biden won by over 50,000 votes (out of just over 300,000 cast).

I pride myself on being an evidence-based thinker.  I tend to prioritize the opinions and analyses of experts, particularly when they show their work and rely on credible information.  Everyone is prone to feels and hunches, but I regard them as suspect and unreliable.  So when people declared "the polls are wrong" and disdained the analyses of the Nate Silver types, I didn't really listen.  Political polling is a serious endeavor, I presumed, and while errors and fluctuations will certainly occur I found inconceivable the notion that political polling could truly just be a huge pile of fool's gold.  This 2016 article from Pew explaining what had gone wrong and what could be done to fix the polls--coupled with later coverage suggesting the necessary changes had been made--certainly didn't deter me.

So, I figured the polls would mostly get it right in 2020.  That's not to say I expected 100% accuracy.  But I imagined the polls wouldn't be off my more than 2-3 points except in maybe one or two states, and that any polling errors that did occur were about as likely to favor Biden as Trump.  In fact, deep down I believed polling errors were more likely to underestimate Biden, since 45 was more a of known quantity by 2020.

Because of this, I expected election night to be a Biden/Harris romp.  Yes, I knew Pennsylvania would take days to count and a few other states might not come in.  But the polls had Biden winning Florida and North Carolina, neck-and-neck in Texas, Iowa, and Ohio, and winning by comfortable-to-huge margins in Wisconsin, Michigan, Nevada, and Arizona.  Had that happened--or even had most of that happened--we'd have been spared most or all of the drama and could have had our Saturday celebration on Tuesday night.  What we got instead was this nonsense:

Let's review some of it.  The polls missed Pennsylvania by four points, Michigan by five, and Wisconsin by nearly freaking 10 points.  At least Biden still carried each of those states but WFT polls?  The polls missed trump states Texas (four points), Iowa (seven points), and Ohio (nine points) by similar margins--though again, at least they got the outcomes correct.  But they didn't get the outcome right in Florida, which they missed by five, or Maine's second district, which they missed by 10.  They also got North Carolina wrong, though the three-point differential there almost looks like a triumph of quality polling in comparison to some of these other disasters.

Nationally, Biden was favored by more than eight points in the popular vote and wound up winning by just five.  While that seems like another acceptably small three-point error, keep in mind the dreadful 2016 polls that caused everyone to question them in the first place only missed the popular vote by about two points.

Already Silver is peddling excuses for the pollsters and returning to the "it's your fault for trusting them" argument that is somehow supposed to bring us back to 538.  I guess I'll take that literally this time.  I now consider political polls fully arbitrary unless and until proven otherwise.  Close your eyes, Marion.  Don't look at them.

We didn't need to wait long for the first brilliant piece of art celebrating the election of the first female vice-president, who is also the first Indian-American to reach the post.

The piece of course evokes the famous Norman Rockwell painting featuring Ruby Bridges being escorted to her elementary school in New Orleans.  The armed guards are gone now, of course--though one wonders if they should be.

But there is plenty more to check out.  The Lewis-McCain heavenly fist-bump.  The Hank Willis Thomas piece about counting every vote from every kind of voter.  Mississippi replaced its flag.  This.

Despite losing by some 5 million votes nationally and not being particularly close in any state that could affect the outcome, Team Trump dispatched their phalanx of election lawyers to try and create judicial chaos around the outcome for . . . reasons, I guess.  "Networks don't get to decide elections. Courts do," Giuliani declared.  Anyone but voters, it seems.

As Republicans have been doing for years, they complained fiercely about supposed voter fraud in the media.  Yet the lawyers failed to produce a single shred of evidence establishing voter fraud once they got to court--which is not surprising because voter fraud is vanishingly rare, and really just used as a false justification to suppress voting.  The lawsuits wound up being about such nonsense as whether Republican "election monitors"--really just goons harassing poll workers--were allowed to be close enough to vote counters, or whether they should have had more of them in rooms, or other such drivel.  The cases were or are in the process of being dismissed, and one of their law firms was taking such a hit to its reputation that the firm even withdrew from representation.

What these lawsuits seem ultimately to reflect is the far, and maybe not even that far, right's view of the the judicial system and litigation.  Court cases are supposed to be about finding facts (i.e., the truth) and applying the appropriate laws and rules to the matter.  Yet the trumps seem to view litigation akin to something like a gymnastics meet, where lawyers compete against each other as if they were athletes and their performances are scored by judges--whom, the trumps seem to presume, are mere partisans destined to rule in favor of the party who put them on the bench.  Maybe some SCOTUS justices see things the same way.  I guess if they are not into following the rules anymore...

While Black voters delivered Michigan, Pennsylvania, and Georgia, it was the often-overlooked Native American vote that proved decisive in Arizona:

Biden won Arizona by fewer than 12,000 votes--so the 425,000 Native voters in Arizona were a critical constituency and they not only turned out in remarkable numbers (116% of 2016 turnout in Apache County, where the Navajo and Hopi nations are located) but supported Biden/Harris by margins well over 60% statewide, and well over 90% on some tribal lands.

And it wasn't just Arizona.  Wisconsin's 80,0000 Native voters also proved decisive in that state, which Biden carried by just over 20,000 votes.  Turnout in Menominee County (which largely overlaps with the Menominee Nation reservation) increased by 20% over 2016, with Native voters breaking better than 4/5 for Biden/Harris.

How does that even happen?  I don't buy for one second that it was just some kind of mistake where a staffer confused FSTL for the Four Seasons hotel.  But there really isn't so much to be said about, it, best to just look at the pictures.

There's, of course, Rudy going all banana-republic-scary-junta-henchman, which I guess he has had plenty of practice at so far. 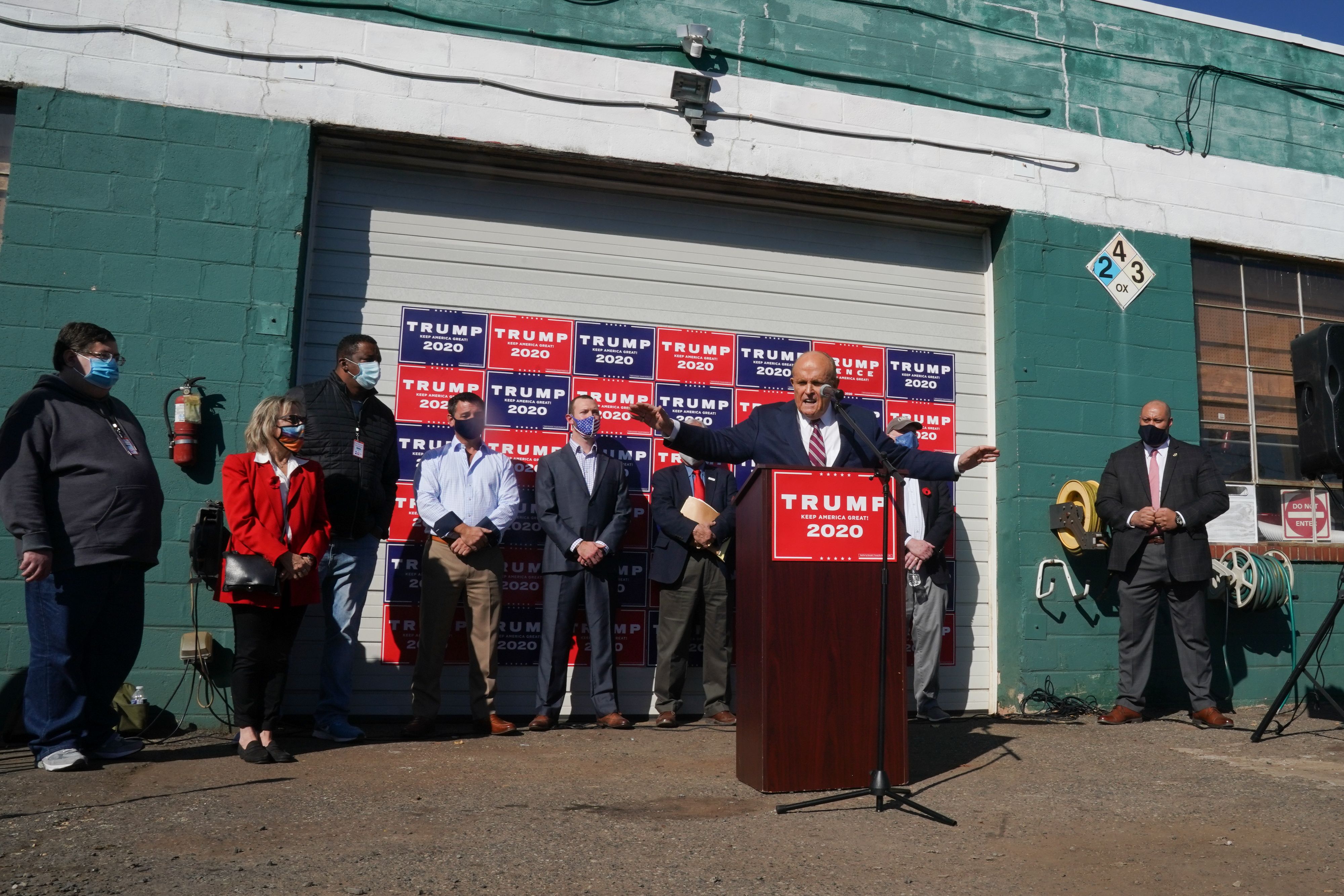 There's the side view so we can get the more complete Mad Max effect. 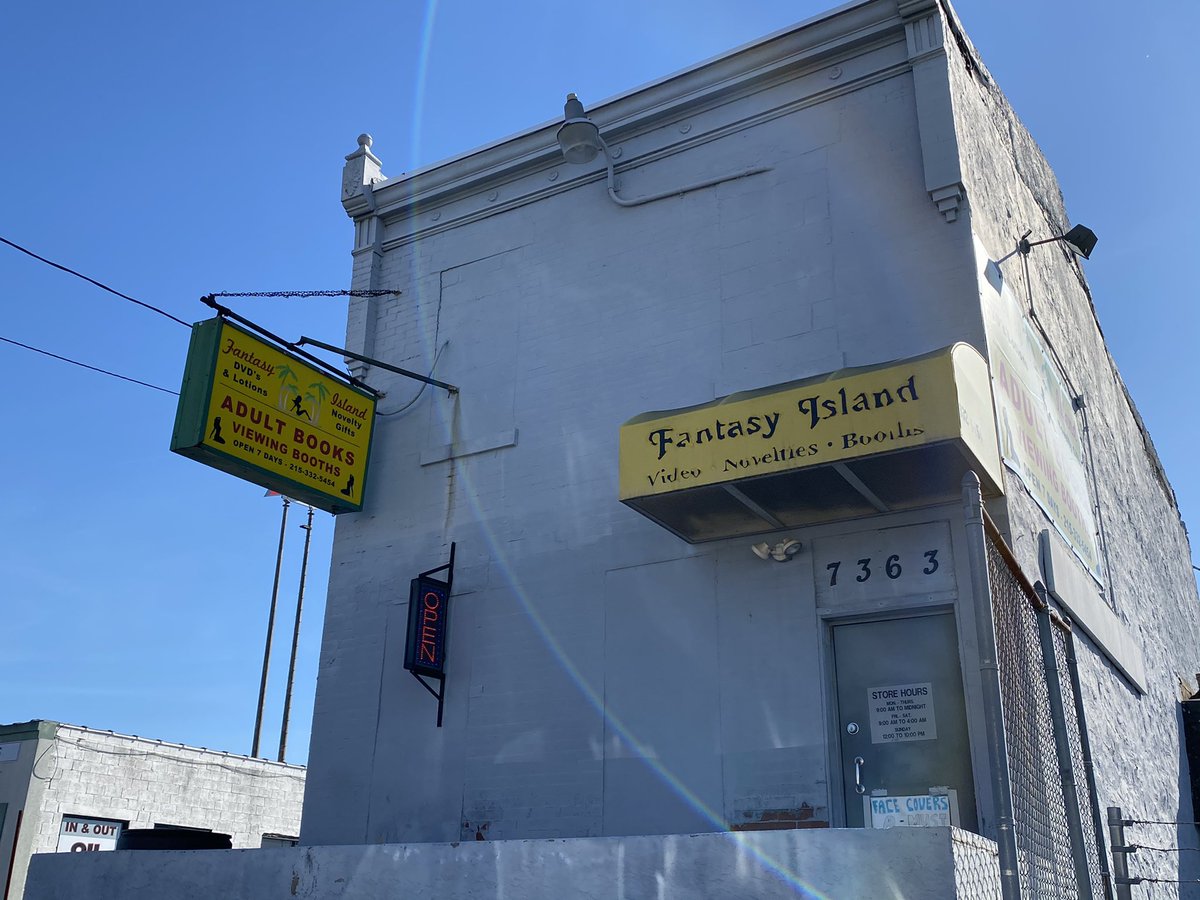 Actually, that entire block is just loaded with upscale establishments fit for a presidential press briefing: 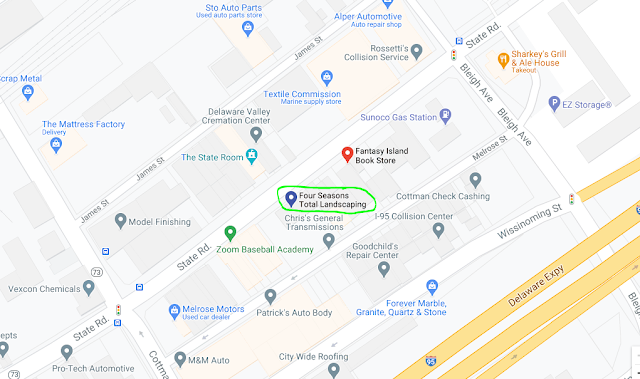 Seems like the kind of street where somebody in an Al Pacino movie would be lured and then whacked for having insulted a made man.  And look, Delaware Valley Cremation Center right across the way.  Almost wonder if the reporters attending the event were treated to the smell of burning flesh too, as they listened to Rudy rant and rave. 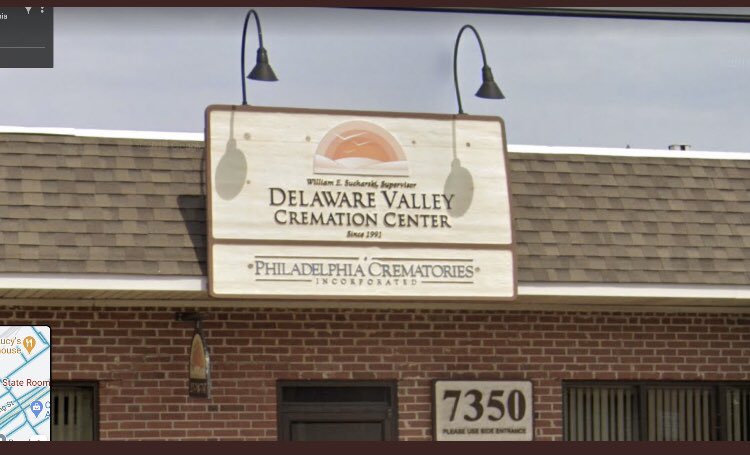 Better yet, just burn it all down.

Rise from the ashes to B.B.B. 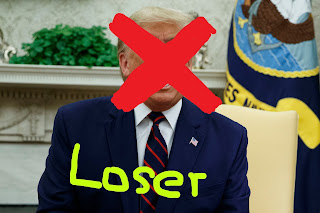 Alright, here we go.  I'll do my best to keep this updated throughout the evening.

* Had called AZ for Biden earlier based on the AP projection, but moving it back to gold for now 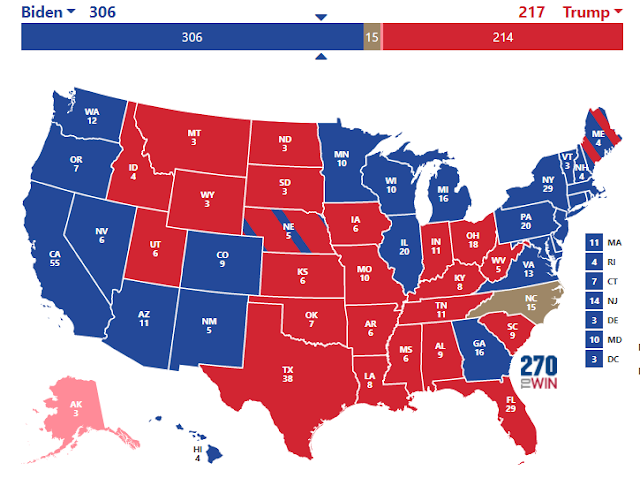