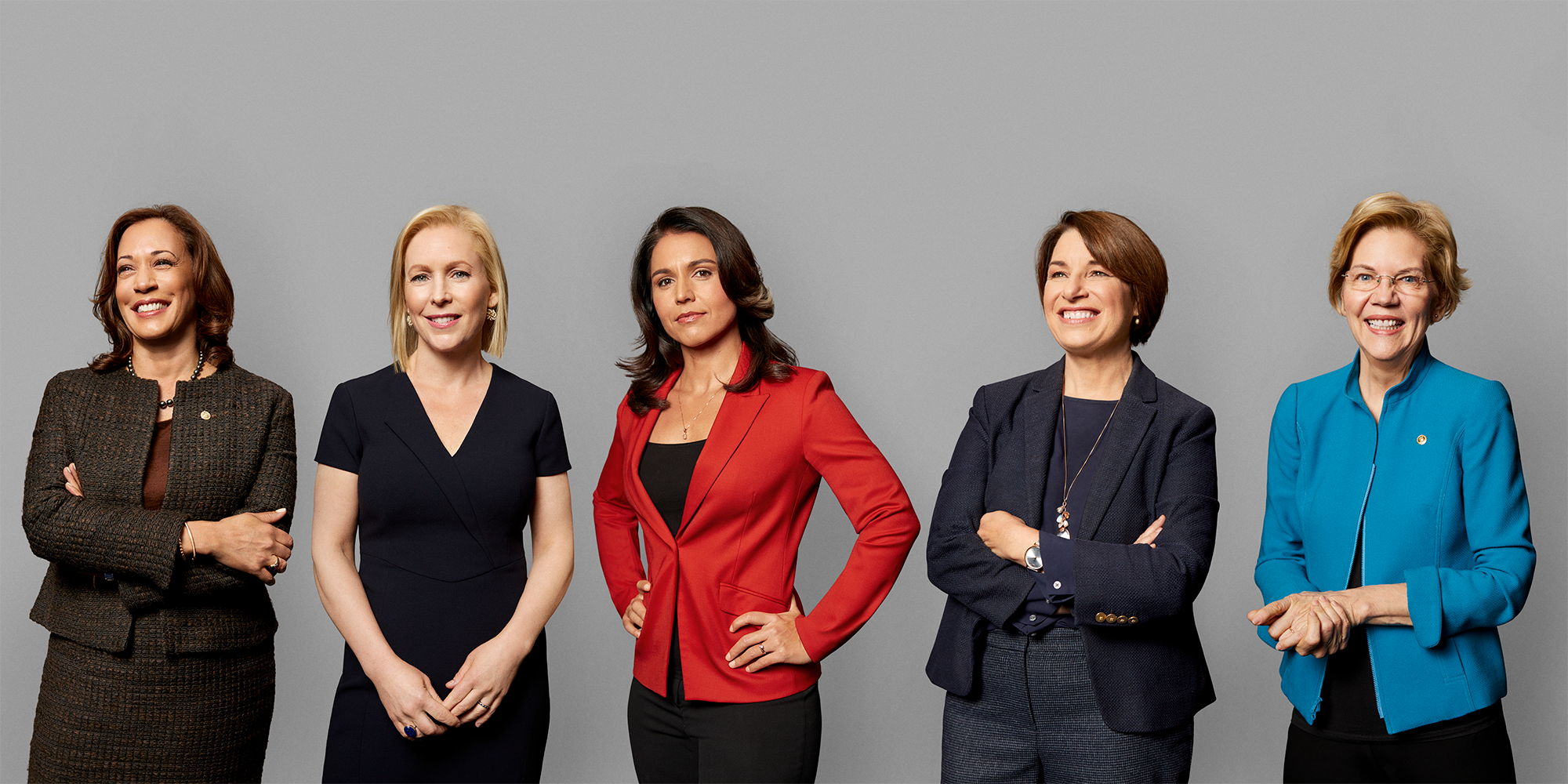 So, there was a bit of a dust-up recently a few weeks ago Elizabeth Warren and Bernie Sanders, which supposedly revolved around Sanders having told Warren in 2018 that U.S voters would never elect a woman President.  He denies it; personally I believe he did say it, but even if he didn't he must have said something close; it seems absurd that Warren would simply invent such a claim.

Regardless what Sanders said or how he said it (or didn't say), early returns from the 2020 electoral process are suggesting that the statement may, pathetically enough, be true.  Warren finished a distant third place in the Iowa caucus and fourth in the New Hampshire primary, and she isn't expected to do much better in the upcoming early primaries; 538 projects her to finish fourth again in both Nevada and South Carolina, and has her running fourth or fifth in almost all the Super Tuesday states that go to the polls on March 3 (the exceptions being her home state of Massachusetts, where she's polling second, and Maine, where she's still only third).

That much alone is not all too remarkable; Bernie Sanders remains a popular progressive candidate and was fully expected to mount the strongest immediate challenge to establishment pick Joe Biden for the nomination.  Warren, from all accounts, was expected to slot in third behind those two at the outset, with a chance to hang around and contend as the field narrowed.  If you believe the latest word coming out of Warren's camp, this was actually the strategy all along.

But Biden crashed & burned in Iowa, finishing in fourth place and barely surviving the viability threshold in many caucus sites.  Then he got smoked again in New Hampshire, dropping all the way down to fifth place.  Not a good night for a guy who's supposed appeal is basically just the old inevitability shtick.

With Biden foundering, Warren should be second, neck-and-neck with Bernie, right? RIGHT?

Well, she's not.  Little-known Pete Buttigieg came out of seemingly nowhere to grab over 22% of the votes in Iowa and knock Warren back to third place.  Buttigieg turned in another strong performance in New Hampshire, finishing a close second behind Sanders.  So what gives?

One possibility is that the white liberals and other centrist voters are simply souring on Biden and see Buttigieg as their next best hope for restoring the old order.  This seems plausible--after all, Biden is a guy who bizarrely told an Iowa man to "go vote for someone else," told an immigration rights activist who questioned Obama's epic level of deportations that he should vote for Trump, and--get this--called a New Hampshire woman a "lying, dog-faced pony soldier," and on the day before the primary no less.  With Biden quite clearly losing his edge, why wouldn't the corporate Dems be looking around for something else?

Minnesota Senator Amy Klobuchar, another established middle-of-the-road centrist, is still in the race--as was fellow corporate type Kamala Harris.  So that's at least two candidates Wall Street can trust and who have deeper political experience and greater national cache than the former mayor of freaking South Bend, Indiana .Besides, it's not as though Warren herself plans to call up the national guard to seize the means of production.  But Pete's the one getting the votes, and the ladies are not.

Indeed, it appears much more likely that the problem with Klobuchar, Harris, and Warren is simply that they are women and Pete's a man.  Now, I am sure if you asked 100 Buttigieg voters why they chose him and not one of the other candidates, you would get from many different answers--none of which would be "cuz I don't vote for the dames."  (No anti-pun intended).  And some of Buttigieng's voters undoubtedly would have gone his direction regardless--even some of the decidedly fringe candidates like Tom Steyer or Duval Patrick are going to bleed a couple percentage points from the front-runners as long as they linger.  But by and large, I'd be stunned if there was a meaningful explanation.  "I like his policy on X issue" will undoubtedly be refutable by demonstrating that Mayor Pete's position is exactly the same, or even less appealing to the voter in question, than some other candidate's view on that same issue.  Or it'll just be inexplicable instincts & feels--which is honest, but probably at some level a function of unconscious bias.  And by "probably," I mean "absolutely it is, I just don't have the evidence to prove it."  At least I don't think I do.

With my background in nonprofit legal services, I've been in group situations more often than I like to admit where despite everyone being consciously open-minded and even desirous of diversity along racial, ethnic, gender, economic, and other lines, you look around at the group and there really isn't any diversity to be found.  Or maybe there is some token level, but really not what you'd expect to see if that group had a genuine commitment to inclusivity and an actual plan for making it happen.  Probably because ultimately the membership of any group is going to be a function of micro-level decisions about what the group does, how it does it, how it recruits and chooses members, how the members relate to each other once engaged, and so on.  And those decisions will be tainted by all manner of unconscious biases--and probably some that undermine even sincerely-held desires for inclusiveness.  So-and-so "did well in the interview" or "really connects with our members" or is a "better fit for the organization."  That's how it usually goes.

And that dynamic is what feels like is happening in the Democratic primaries.  The Dem candidates might talk the talk about civil rights and inclusion and gender equity--well, the non-Bloomberg ones at least.  Undoubtedly the large majority of Dem voters believe they sincerely want those things.  But few have grappled with their unconscious biases--and when it comes time to choose presidential candidates, allow themselves to be driven by feels rather than objective analysis.  Maybe Buttgieg did well in a debate someone watched, maybe he connected with the crowd at a speech someone attended, maybe he just seems like a better fit for the Oval Office.  Those aren't good reasons to vote for the guy.  But the thing about voting is, you don't need a reason.

Women can be senators, of course; women can also be governors, Supreme Court justices, Speakers of the House--women can even be Democratic Party presidential nominees when they begin the race with a mountain of cash and the party establishment uses all manner of procedural shenanigans and dirty tricks to make sure her only serious primary challenger doesn't win.  But can a woman be President of the United States?  Bernie doesn't think so.  It looks like he could be right.

After all, so far we have just been talking about the Democrats.  Terrible though the Democratic Party may be it is simultaneously way-less-terrible than its counterpart, the Trump-era GOP.  Democrats at least consciously reject gender bias and other forms of blatant discrimination.  Suffice it to say that many in today's GOP do not.  So whatever problems gender bias might cause a female candidate in securing the Democratic nomination, one must expect exist in spades throughout the general electorate.

Many progressives have long been deeply wary of this country's low-brow culture and its large, irrational, white supremacist right.  We worried that Hillary Clinton was a deeply-flawed candidate that voters all across the political spectrum would loathe (albeit for very different reasons).  And even so, we were frankly stunned that Donald freaking Trump won the 2016 election despite the endless list of reasons he had no business even coming close.  As much as we distrusted the U.S. electorate, certainly there was some limit to how low they would go.

In 2016, they proved there was not.  To now I have searched for an explanation lying somewhere within working class rage against a political system that reliably prioritizes the wealth regardless which party is in power--a vote for Trump was at least a vote to reject that status quo, a cry for some kind of change whether good or bad.  And I still think that is a big part of it.  But maybe I've been looking too hard.  Perhaps the bottom would not have totally fallen out but for one last critical factor, hiding in plain sight all throughout.

Maybe what U.S. voters really proved in 2016 was that their gender bias runs so deep that they'd sooner elect a comic book villain president than a highly-qualified woman from from central POTUS casting.  And by "maybe," I mean "absolutely they did, I just don't have the evidence to prove it."   At least, I don't think I do.