Ruth Bader Ginsburg has passed away and the Republicans are going to try and replace her seat on the U.S. Supreme Court before Trump leaves office.  They will probably succeed.
If we weren't six weeks from a presidential election, there would be no question.  Even though the Republicans refused to allow a confirmation vote on Merrick Garland in 2016 on the claim that "voters should decide" who to replace Scalia when he died nine months before the election, expecting the GOP not to do something that benefits them ever is a fool's wager.  The Republicans control the White House and the Senate, the filibuster is long dead, and if the Brett Kavanaugh confirmation didn't convince you today's Republicans have have no integrity then certainly the farcical post-impeachment trial of their favorite demagogue should have.  Among various other things, of course.
One strategy that some have mentioned to try and deter Republicans from ramming through a new justice is for the Democrats to raise the specter of court-expansion.  The Dems already control the House of Representatives, and might win back both the White House and Senate this November. If they do, then they would have the power to change the number of SCOTUS seats to whatever they want. Make it 13, some have suggested--enough for a President Biden to add four more onto the remaining "liberal bloc" and tilt the court away from the stone-agers.  Of course, most of the people suggesting this don't necessarily want to see an actual court-expansion scheme come to fruition. They'd prefer to see Ginsburg's dying wish fulfilled--that her replacement not be nominated until after inauguration day, with the number of justices remaining unchanged.
I have no idea what drives this sort of orthodox cautiousness except perhaps fidelity to the bizarre  sacredness of nine.  The reality is that nine justices is a bad number and Congress should expand the court as a matter of good government no matter what happens with Ginsburg's seat.  Of course, neither side would trust the other to fill any newly-created vacancies--so the only chance of it happening is with a Dem trifecta.  Which could happen.
And if that trifecta materializes, then the Dems should expand the court.  And not just to 13 justices.
For starters, just saving RBG's seat isn't really enough. The liberals only had four seats with her, and hanging onto her spot still leaves them one vote short almost every time.  Granted, now and then the liberals can pick off a fifth vote from the conservative wing, usually Roberts.  So losing RBG's seat does do some real, practical damage.  But if expanding the court is on the table, then the Dems need to go for that, not just angle for the continued ability to lose most cases 4-5 instead of 3-6.
And then it's just a question of how many.
The number 13 comes from pure political expediency.  It's the minimum number needed to outvote the far-right wing of Roberts, Alito, Thomas, Gorsuch, Kavanaugh, and mystery six.  But already this seems a questionable calculation.  What if the Republicans take back the White House in 2024?  Even assuming the 7-member liberal majority is still there heading into 2025, who's to say all seven will still be around by 2028?   Losing just one seat could swing the court back to the right just as quickly.
Whether with nine justices or thirteen, a single death or retirement remains a massive-leverage event.  So if the Dems want to pack the court for purely political reasons, they ought to give themselves some margin for error.  That means going up to at least 15 justices, not just settling for the minimum.  But 15 justices isn't really enough either, and that's because there are more compelling reasons than politics for expanding the court.
* * * * *

Let's examine, for a moment, one case from the last Supreme Court term.  The case is Dept. of Homeland Security v. Regents of the University of California--commonly known as the "DACA case," as it concerned whether the Trump administration lawfully terminated the Obama-era program known as "Deferred Action for Childhood Arrivals," or "DACA."
It's no secret what Trump or his MAGA horde think of immigrants.  Trump himself has made countless disparaging remarks about actual or would-be immigrants, people of color, countries from which immigrants come from, and so on.  He's tried to build a literal wall across the southern U.S. border to stop immigration and stole money misappropriated funds from other federal activities to pay for it.  His administration has caged children, separated young kids from their families--and then lost the children, employed various tactics reminiscent of South American secret police squads to seize and deport noncitizens, neglected medical treatment in ICE detention centers, and was recently found to have given involuntary hysterectomies to many immigrant women.
The administration has also tried to implement a series of punitive and destructive agency rules in pursuit of a total policy of cruelty toward immigrants.  When they have done that, various people and organizations opposed those policies have sued.  In one particular challenging to one of those anti-immigrant policies--termination of DACA, through which law-abiding people who entered the U.S. as children and have grown up here are allowed to stay in the country, work, and pay taxes--the plaintiffs alleged that the rule was motivated by anti-immigrant animus.
Of course it was motivated by anti-immigrant animus.  Could anything be more obvious?   Well, not to Chief Justice Roberts, who wrote the majority opinion:

"To plead animus, a plaintiff must raise a plausible inference that an 'invidious discriminatory purpose was a motivating factor. in the relevant decision.  Arlington Heights v. Metropolitan Housing Development Corp., 429 U. S. 252, 266 (1977). Possible evidence includes ... pre- and post-election statements by President Trump... [R]respondents contend that President Trump made critical statements about Latinos that evince discriminatory intent. But, even as interpreted by respondents, these statements—remote in time and made in unrelated contexts— do not qualify as “contemporary statements” probative of the decision at issue. . . Thus ...  the statements fail to raise a plausible inference that the rescission was motivated by animus."

I also know that because of Justice Scalia’s outsized role on the Court and in American law, and the fact that Americans are closely divided on a number of issues before the Court, it is tempting to make this confirmation process simply an extension of our divided politics -- the squabbling that’s going on in the news every day.  But to go down that path would be wrong.  It would be a betrayal of our best traditions, and a betrayal of the vision of our founding documents.  At a time when our politics are so polarized, at a time when norms and customs of political rhetoric and courtesy and comity are so often treated like they’re disposable -- this is precisely the time when we should play it straight, and treat the process of appointing a Supreme Court justice with the seriousness and care it deserves.

Many on the left were disillusioned with Obama for his nomination of Garland all the same.  Extremists like Alito and Roberts could not be countered with centrists and law enforcement sympathizers.  And if the Republicans were going to fight the nomination no matter whose name came up, might as well pick a name worth fighting for.  But Obama didn't see it that way.  Someone needed to stand for the integrity of the court and the legal system, and strive to place it back above partisanship once again.  Much as his choice may have been engineered by circumstance, he made the right one nonetheless.  Obama was, in many ways, a president ahead of his time.
In the end there never really was much of a fight; McConnell simply said no, like he always does, and that was simply that.  This was really too bad--for in refusing to act on Garland, McConnell was also rejecting the opportunity to govern responsibly and in good faith.  As is his wont.
* * * * *
Ahead of his time.  Obama's nomination of Merrick Garland may not have delivered a justice to the Supreme Court bench in 2016, but his message then is the correct one now: the Supreme Court is too important, the U.S. legal system is too important, to be dominated by wholly partisan forces.  When robed ideologues lose sight of their first duty--maintaining public faith in the integrity of the judiciary--and simply fix their reasoning around desired results, the legal system descends into farce and the rule of law gives way to chaos and arbitrariness.  Obama had it right in 2016: right-wing ideologues cannot be balanced by left-wing ideologues--but rather by objective and intellectually honest justices.
So that's why 13 justices or 15 justices or even 18 justices is not enough. Perhaps the Democratic Party feels it may need a seven-member liberal lineup to counter a six-member right wing group.  But that is not what the United States needs.  The United States needs a whole bunch of objective, intellectually honest professional jurists who put the integrity of the Supreme Court and the federal judiciary ahead of and above ideological political concerns.  Enough so that none need to think about who the president happens to be or which party he or she is from before hanging up the robe on a distinguished legal career at age 70 or 75 or 80.  Enough so that a sudden stroke or heart attack need not bring Facebook and Twitter to the brink of civil war.  Enough so that lawyers saddled with six figures of student debt can feel like they at least belong to an actual profession, and not some random order of pagan water oracles.  And surely enough to drown out the occasional, diminishing screeches of anti-democratic partisans who assure us that public denunciations of immigrants are not evidence of anti-immigrant bias.
If the Democrats gain the trifecta, expand the court they must.  25 justices or bust.
RIP Justice Ginsburg.  Thank you for your immeasurable contributions to our law, our government, and our nation.
at September 20, 2020 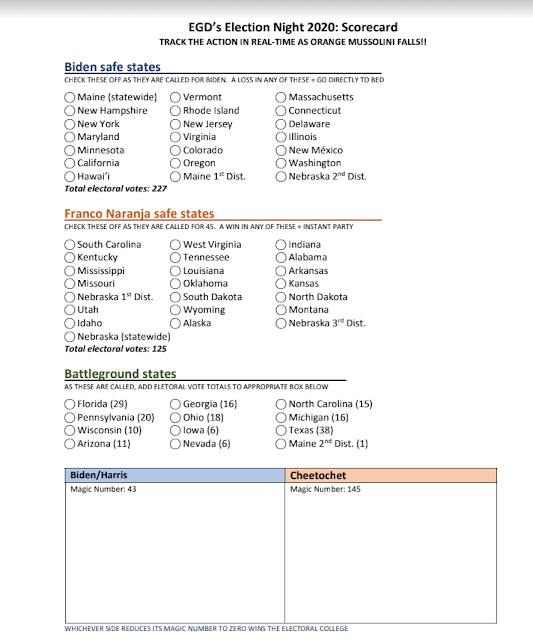