The harrowing news from Italy in early 2000 read like something out of the Camus novel (yes that one): a population stunned by an unknown killer they didn't take seriously until it was too late, disregarding warnings and wasting critical preparation time, forced into a near-total lockdown, with streets patrolled by police and hovering drones to ensure compliance.   Ditto Spain.  Ditto France.
With the benefit of extensive warning, however, the USA should never have suffered what Italy, Spain, or France did--let alone the far worse outcome now unfolding.  Countries like Germany and Canada capitalized on the advance notice and took precautions that have effectively minimized the impact of Covid-19; the USA could have done the same, but nah. With dreadful leadership and a surpassingly ignorant population, Covid-19 has already killed nearly 140,000 in the USA and there is no end to the carnage in sight.  Did I mention Disneyworld just re-opened?
Some people tried, of course.  The short-lived "flatten the curve" meme, made popular in no small measure by viral social media infographics, urged folks to work from home, avoid nonessential trips, and eventually wear masks in public.  But that genius population again.  They understood this meaning about as well as "Born in the U.S.A."
The point of "flattening the curve" was always to keep the number of active Covid-19 cases at a manageable level so as to avoid the Italy situation--overrun hospitals forcing medical staff to do battlefield triage and leaving sicker and older patients to die in hallways and empty homes.  This meant the peak of the Covid-19 pandemic in the USA would ideally be a long, mostly horizonatal line (hence "flatten the curve") rather than the tall spikes Western Europe experienced.  And yet somehow the magical thinking American thinkie confused this concept with the notion of containing the disease--i.e., falsely concluding that once the curve had been flattened, conditions would be safe to resume economic activity forthwith.
This all proved catastrophic error.  The U.S. curve flattened around May 1, 2020--a time when the U.S. had almost 900,000 hospitalized Covid-19 patients and was still adding roughly 30,000 new ones per day.  But new infections were at least inching down, and projections at that time showed the U.S. bringing the virus fully under control by mid-summer.  That's right--we could have been done by now.  But those projections were based on schools, businesses, and offices remaining closed and quarantining continuing.  Change the assumptions, disregard the results.
Instead, already by early May the mood in the U.S. media had largely shifted to a "time to reopen" narrative, driven largely by politicians and industry figures celebrating the flattened curve and counting on the virus to somehow melt away in summer sun.  They won, rolling out responsible-sounding plans for phased reopening that were actually products of business lobbying, not sound public health advice.  If only they would teach "controlling the narrative" in public health school.  WTF Hopkins?
And so, predictably, the U.S. is now mired in a Covid-19 death spiral, adding new confirmed cases at twice its highest pre-shutdown rates and facing ICU bed shortages in hospitals throughout several southern states.  And California, because all that's gold does not glitter. 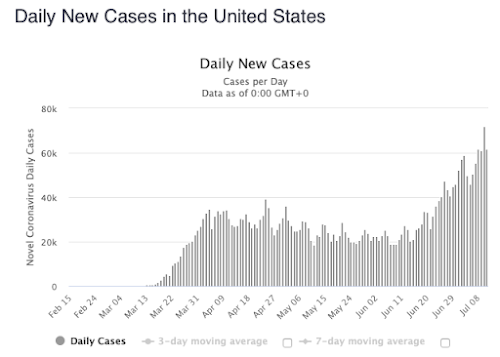 So what was flattened is now vertical.  (Have you started to notice how much the individual lines come to look like a series of middle fingers?).  Good job, chambers of commerce, ALEC, whoever T.F. else.  Hopefully your mom doesn't come to the award ceremony.  Unless she's as much of an asshole as you are.
Now the U.S. is in an even deeper hole, one so deep indeed some people are suggesting we don't even try to climb back out.  One blogger suggests we are now in an irrecoverable "plague state" he describes as a sort of microbiological Matrix.  At the very least, a domestic Covid-19 holocaust is now unavoidable and the horrendous mismanagement has basically meant the meager steps we've taken--and the massive federal funds we've spent--to combat the pandemic so far have largely been in vain.
In light of all this, you might think everyday people in the U.S. could agree the government needs to get its act together.  Just figure out a plan to get Covid-19 under control someday.  Pretty much every other country has managed to do it--those that have at least been trying, anyway.  Instead we're doing about the same as those other striking examples from similarly dysfunctional rightward regimes such as Brazil, India, and Russia.  Check that--worse, except maaaaaybe for Brazil.  Call us the Axis of Covid, I guess.  We already got the concentration camps. 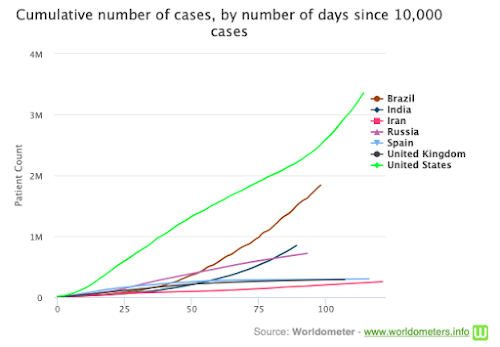 The Medium guy could be right, say Covid-19 really is a viral Skynet that can't be defeated short of time-travel technology, or at least a vaccine.  So what?  Still need to fight back.  Same thing might have been said about the virus in Italy or Spain when it was rampaging through their streets and hospital wards too--and they still managed to beat it down despite their own internal political issues.  Like Spain doesn't having a f*king right and left.  We at least need to try, and not just because I don't want Sarah Conner kicking all our asses.  Here's what it would take:
It's not clear how low the daily case count would need to be for contract tracing to have a chance.  The U.S. is posting daily case numbers north of 60,000 these days-- doubling up runners-up India and Brazil (in the high 20's and 30's).  One public health official has said those India/Brazil type numbers (note the U.S. pre-re-opening low-point was around 20,000 per day) would still be too many given then-current resources, but maybe not; some states have assembled "armies of contract tracers" thousands strong to potentially handle significant numbers.  South Africa is around 15K new cases a day, and then there's a cluster in the 5,000-8,000 new-cases-per-day range. Let's go for that.  Getting to < 8,000 cases per day hardly looks like a moonshot, and then you're basically talking 160 new cases per state per day.  I'm no epidemiologist but that feels doable.  If only an, um, effort could be undertaken.
It took Italy two months and Spain three months of intense quarantine to get Covid-19 under control; it might take the U.S. longer but even four or six or eight more months of quarantine is preferable to being a permanent plague state.  So what holds us back?  Economics.
Attributing the disastrous U.S. re-opening simply to error would of course be indefensibly charitable, as there are certainly those who sought to re-open prematurely for reasons of greed or other ulterior considerations--perhaps the most famous being the Lieutenant Governor of Texas and his brilliant declaration that "[t]here are more important things than living."
And yeah, perhaps there are more important things than living.  But then you're talking about things like various romantic concepts and Mr. Spock genesis shit and rah-rah patriotism and so forth--not haircuts and waiting tables.  You know what's worth dying for?  Ending fascism.  Now there's something that might be more important than living.  Not storming the beaches for dollar pitchers and access to an elliptical machine.  Never mind what the people saying that shit actually think about ending fascism. 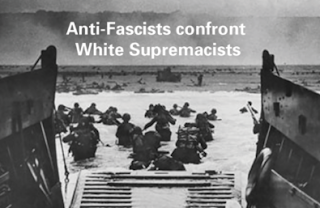 Sill, opposition to quarantine restrictions and braving the dangers of infection to resume economic activity is hardly limited to the modern day Marie Antoinettes of the federal government or their well-heeled patrons whose stock portfolios require letting us eat coronavirus.  You can't live for free in the U.S. these days, people need money.  And that's been a bit of a problem too.
Since Covid-19 arrived in the USA, over 40 million people have filed unemployment benefits claims, with nearly 33 million people receiving benefits in June--record numbers several times higher than seen in past economic recessions.  The U.S. Census bureau recently reported that over 9 million renters had no confidence in being able to make their next rent payments, with another 13 million having only "slight" confidence.  As state and federal eviction moratoriums expire, this means over 20 million renter households (upwards of 60 million people) could soon face homelessness.  Food banks have experienced stunning increases in the demands for food, including lines of cars stretching to unbelievable distances.  About 36% of U.S. households are now believed to be behind on utility bills, though shut-offs are temporarily suspended in much of the country.
It's understandable that many people facing homelessness or food insecurity find the risk of getting sick with Covid-19 (or even passing it on to a family member) worth taking.  But the alternative to re-opening does not, and should not, be homelessness, missed meals., or the deprivation of other basic necessities.  Popular support for carrying on with re-openings and "learning to live with" Covid-19 would likely plummet if those whose incomes have been disrupted could be assured of housing, utility service, health care, adequate nutrition, and a modest allowance to cover their basic needs for as long as needed during the lockdown period necessary to control Covid-19.  Sort of like what Canada has done.
Indeed, even the U.S. has actually already done some of these things for some people.  It will need to do those things again--but better, and for everybody.
at July 12, 2020