Orwell's 1984 basically divides the world into three super-nations called Oceania, Eurasia, and Eastasia.  The one of those that forms the setting for the novel, Oceania, is perpetually at war with one and allied with the other.  Nobody really knows why.  Then, from time-to-time the nations that Oceania is allied with and at war with flip--suddenly, and for equally unknown reasons.
This isn't such a big deal since war is peace, of course.  Still, having people actually think about these wars and alliances and the reasons (if any) for them might not be in the bests interests of the supreme leader.  So to prevent such "thoughtcrime," the past is carefully controlled.  At the outset, when Oceania is at war with Eastasia and allied with Eurasia, all of Oceania is directed to chant the mantra "We have always been at war with Eastasia!"  This is shouted eagerly and passionately--even though a few years earlier Oceania was at war with Eurasia and allied with Eastasia.
This isn't a problem either, because ignorance is strength.  Big Brother makes sure all accounts of the preceding war with Eurasia and alliance with Eastasia are declared false and obsolete.  They are culled from libraries and records repositories, eventually to be eliminated altogether.  Meanwhile the inescapable, widespread claims that "we have always been at war with Eastasia" lead those courageous enough to risk an independent thought to doubt their own memories.  I think this is might what people now call "gaslighting."  I have to guess because I don't know.  But hold that thoughtcrime.
* * * * *
In recent weeks, some rather encouraging medical science has emerged around the manner of Covid-19 community transmission.  The first big piece was a popular WSJ article that described a growing consensus of experts around the belief that "[s]urface contamination and fleeting encounters are less of a worry than close-up, person-to-person interactions for extended periods."  Then a Texas Medical Association chart made the rounds; it ranked the transmission risk of 37 common activities from low-to-high, reflecting the same basic concepts as the WSJ consensus: avoid prolonged exposure to other people, especially in closed-in spaces, worry less about touching tables and doorhandles, brief inter-personal encounters, or activities outdoors or in other wide open spaces.  Then the NY Times reported on a blockbuster study involving the case of two Missouri hair stylists.  Both tested positive for Covid-19 after cutting hair for an alarming 139 clients while contagious--a super-spreading opportunity if ever there was one.  Yet both stylists wore masks, and not a single one of those 139 was infected.  Ningún.
I'm no scientist, but that's enough for me.  Seems that if we can avoid doing stupid things, like holding indoor church services or sending children to in-person schools, and if we can just get everyone to wear masks in public places, then we should be able to bring the Covid-19 infection rate down to a manageable level.  Then we can contain it through contact tracing and start resuming pre-Covid activities for reals.  In fact, that's also what the actual director of the Centers for Disease Control said this week:

"[I]f the American public all embraced masking now and we really did it, you know, rigorously ... I think if we can get everybody to wear a mask right now, I really do think over the next four to six, eight weeks, we can bring this epidemic under control."

I mean, yes please! Mask up!
Covid-19 has already taken out over 142,000 of us here in the U.S.A., with nearly 2 million others presently infected.  Hospitals are in danger of being overwhelmed (in fact, many probably are already--but the WH seizure of Covid-19 data from the CDC has denied the public access to information on ICU beds and ventilators).  Daily new infections are occurring at breakneck speed; whereas public health officials once feared a daily infection rate over 50,000 as a worst-case scenario back in spring, this week the U.S. experienced over 70,000 new infections per day.  And we could turn this thing around just by strapping on the same simple masks those of us with any shred of social responsibility have already been doing for some time now?  Are we seriously not doing that?
Check that thoughtcrime.
If you've already seen the O.C. video, I don't need to tell you why.  If you haven't, picture a couple SoCals from central casting walking around Huntington Beach handing out free masks.  For this they are repeatedly insulted, threatened, ignored, and otherwise disrespected.  Granted a fair portion of that could be good ole' homophobia.  But mostly it's a reminder there's just too damned many of the rightward DT cultists roaming around mask-free making bullshit claims about amorphous rights, issuing aggressive "no thank yous," or popping off baseless theories on herd-immunity (news flash: that's impossible until we have a vaccine because Covid is too contagious and the anti-bodies don't last long enough, plus it would take multiple millions of deaths even if it was possible.  Which it isn't.).  Yeah, and just watch the video.
That video provides just some anecdotal evidence, of course.  Yet there is plenty of quantitative proof if you just look at the states where Covid-19 is spreading.  Florida and Georgia, with their DT fanboy governors, now have the #1 and #6 highest totals of confirmed active cases in the U.S. despite middle-of-the-pack testing rates.  Texas and Arizona are #4 and #5 for active cases--indeed ten of the eleven states where S.E.C. member institutions are located rank in the top-25 of active cases.  Who needs pigskins when you'e got Covid-19?  I probably don't need to tell you how those states normally vote--and no, I don't mean in the AP polls.
Active case counts in the DT states are rapidly shooting up, while the states with some semblance of sanity are largely treading water or gliding back down.  New York, once the epicenter of domestic Covid-19, now has fewer than 178,000 active cases--far fewer than Florida's 287,000+.  Massachusetts and Pennsylvania, states hit hard in the early stages of the pandemic, each sustained over 100,000 confirmed cases--but now are down to about 8,400 (Mass.) and 7,000 (Penn.) active.  By comparison, over 110,000 of Georgia's 135,000 confirmed cases are active, as are 121,000 of Arizona's 141,000 cases, or 26,000 of Missouri's 34,000.  Eleven of the twelve states with the highest numbers of new confirmed cases yesterday were from Trump country: 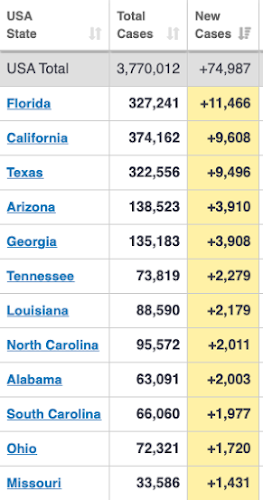 This should not be surprising because the rightwards are the people least likely to wear masks.
Granted, there's the one big exception.  California remains at #2 among active cases and 'Rona continues to wreck havoc apace in the Golden State.  But you saw the O.C. video, right?  Only takes a handful of rightward jerks to wreck your stats--and along with it, your health.  Because that's the thing about masks: they don't really protect the wearer so much as they protect everybody else.  Surely you've seen at least one of these graphics by now:

Wearing a mask mostly prevents an infected person from transmitting Covid-19--it doesn't much help an uninfected person avoid contracting it.  So not wearing your mask is a doubleplusgood way of saying you couldn't care less about your neighbors.  Almost as plusgood as your MAGA hat.
But even the MAGAs do want to resume widespread economic activity, right?  Isn't that why they are out campaigning to re-open schools?  And they can't genuinely believe the virus will simply disappear?  (Alright, maybe they can do that.  Sigh.).  But seriously, there's an easy answer here.  Everybody else is already wearing their masks--even some of the non-Trump GOPs.  Controlling Covid-19 now just means getting DT's branch covidian death cult on board.  F****
He could do it with a word.  One f*king word.  If 45 said a face mask makes an effective parachute, would anyone seriously doubt we'd see a gaggle of Trumps jumping out of airplanes with Stars & Bars masks for parafoils?  Of course they would.  Right into SPLAT.  A couple of them already drank pool cleaning chemicals because of something 45 said earlier.  So if 45 tells his genius klan mob to wear masks, they'll strap all kinds of things over their damn faces.  No doubt they own plenty of cloth.  For some reason, though he says he won't tell them.
So what's the hold up?  Why won't DT do it?  Evidently because he's already said a bunch of stupid things about masks, including mocking reporters and criticizing political opponents for wearing them and publicly refusing to wear them until making an exception for a recent appearance at a military hospital.  DT basically declared himself an expert on Covid-19 at the outset of the crisis and now says he disagrees with Fauci and other public health experts on the value of masks, as if 45's supposed expertise in the matter is on par with that of the nation's preeminent epidemiologists.
It's one thing to correct course after new information proves you wrong--no shame in that.  (And it's a good thing too, as less than a week ago this space was calling for a second round of full-on shutdowns, which now appear to be unnecessary).  But that's for humble people who try and make evidence-based decisions.  When you disregard the experts and repeatedly double down against masks based on nothing but your mental pair of deuces, yeah, that when you risk actually losing face when you're forced to admit your were wrong and that tens of thousands of people have already died or are about to die because of it.  A supreme leader does not lose face.
But could that really happen?  Didn't 45 already say to wear masks?  Hasn't he always said to wear masks?  Hasn't 45 consistently stated from the very beginning that every single person should wear a mask in public at all times?  Wasn't it actually the misguided whitecoats at the CDC who said we didn't need mask and 45 knew they were wrong and insisted we do so anyway?  Hasn't 45 always worn a mask himself, being sure to set the best example for the country to follow?  Al those stories about DT supposedly deriding masks or the people wearing them are just fake news--irresponsible journalism bound to soon be purged from the archives.  Where's your mask?  We're watching you, you know.  Be a shame if you wound up in the back of a van.
Sure.  Who controls the mask controls the future.  Who controls the present controls the mask.  Give the damn order already, and we'll worry about fixing the historical record later.  Will be more pleasant than counting bodies.  Your recollection is outdated.  We have always worn masks in public.
at July 18, 2020