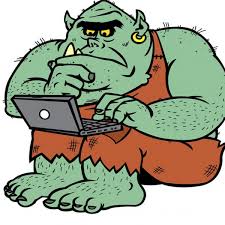 I imagine there were some generally apolitical types around 2016 who didn't much care for Hillary Clinton and opted for the orange as essentially some kind of indifferent protest vote.  Maybe they didn't figure he could actually win.  Maybe they didn't believe how bad it could get.  Maybe, like Melania, they just didn't care.

Frankly, anyone so checked-out and disinterested in current events that they either couldn't peg Trump for a raging white supremacist and con man heading into 2016, or so callous that they didn't care if such a thing became POTUS, or so devoid of judgment that they somehow figured HRC to be just as bad, has already got some work to do on not being a dipwad.  But maybe we can nonetheless give them the benefit of the doubt, provided they've crossed back into the Biden column for 2016 and maybe started a Lincoln Project or done at least some other atonement.  Probably still dipwads, though a bit less so.

The folks still backing 45 at this point, however, are irredeemable bullshit people.  I avoid interacting with them in person and have long deleted all the trumps from my social media accounts.  I encourage everyone else to shun them as well because all trumps should be made to pay for their support of white supremacy and the subversion of representative democracy with a heavy price in exclusion and alienation.  Perhaps the loss of friendships and estrangement from relatives and even close family members will reach them in ways logic, morals, and common decency have failed to do.  If not, then to hell with them.  What are you going to do, go fishing with Uncle Nazi?  Exchange gifts with the KKKousins?  Pose for family photos with your cousin and his MAGA hat?  Somebody might see that, you know.  So don't do it.  #DeleteAllTrumps.

Yeah yeah.  This post is for the people who won't.  Or, rather--this post is for when people won't just delete all trumps, because let's face it, that's all of us sometimes.  We all know attempting any kind of intelligent political conversation with a trump is generally a fools errand these days, but still--there's just those times, man.  And maybe you're not ready to give up on your dad, or your bro, or even your dipwad cousin.  So is there anything short of a miracle that has some chance of working?

Probably not.  But here's some ideas anyway.  Might as well have a plan.  Probably you'll get punched in the face, but still.  Maybe one of these things will work.

So the first thing to understand is that the reason most of your arguments have no chance of working on a trump is just how fundamentally different their whole mental wiring is.  It's not really about "issues" for them.  You won't make much progress demonstrating how right-wing policies hurt them financially or conflict with particular values they claim to hold like "supporting our troops" or "freedom" or "not being a total jackass."  Facts don't matter.  Being consistent doesn't matter.  Logic doesn't matter.  They don't care if they've been lied to, misled, tricked, or betrayed.  Ideas simply do not matter.

About the closest I can relate is to how I used to watch college football.  My team was the Michigan Wolverines.  And I certainly knew college football was, among other things, a cynical, exploitative endeavor in which the players earn millions for their institutions and walk away, often with a sports management degree (if they are lucky) and hopefully not CTE. I had no illusions that winning football games was actually important, or would materially affect my life in any measurable way.  In no way could I credibly deny the existence of so many more constructive uses for my time.  But somehow, man did it feel good when Michigan won a big football game.  But it felt good because the losses felt so bad.

The relief, the avoidance of pain--ahh, probably some kind of dopamine release or some shit. But there was no explaining why.  It wasn't logical or rational or even articulable.  That was my team, yo.  Them winning wasn't like me winning.  I sure as hell didn't do anything to make it happen.  But them losing?  That was like a personal failure.  I knew this wasn't real--but deep down inside, I must have thought it was.

Well, I did give up college football.  But it wasn't because anybody talked me out of it.  I can't really articulate the reasons.  It just...felt like it was time.

There's something about team MAGA that seems pretty similar to all that.  It might be impossible to put into words--but for a trump, there's something about their bullshit movement that awakens a feeling they just can't resist.  For a lot of them, 45 winning might actually be them personally winning.  They can at least say they did something, whether donating money, voting, or worse.  But even if they sat home and did nothing, 45 losing is always going to be them losing.  It's large numbers of people rejecting the very essence of what they identify with.  That hurts.  That feels bad.  And that's what you're up against.  Good luck.

Thus, it's just not realistic you're going to present some kind of brilliant argument that a trump is going to honestly consider, find persuasive, and then apply to his or her own views.  Even for non-trumps that isn't often a very effective strategy.  People become defensive when they feel they are being attacked; trumps pretty much live with the wagons constantly circled.  And again, logical reasoning doesn't work on feelings.  So don't bother coming straight at it.

One thing to try instead is time.  Plant some seeds of doubt and walk away; maybe they sprout into something that bears some fruit later on.  But you need to be patient.  Really freaking patient.  You can't plant your seeds on Monday and harvest the crop by the end of the week.  Either way it's probably a poisoned apple.

So, patience is the first thing--the next thing to account for is that defensiveness.  Nobody likes to be humiliated.  The more thoroughly and convincingly you refute a trump's position, the more likely his cognitive dissonance will have that person clinging to some irrelevant picadillo or non-fact that supposedly casts doubt on your position.  Otherwise, that person will need to admit (at least to herself)  she was wrong, and that won't feel good.  Worse, the person might appear incorrect in front of others, or even have to concede his incorrectness to you, and that would be a loss.  Doubleplusungood.  The dissonance is a defense mechanism; counterintuitively, the worse you bury a trump on the facts and the logic, the less likely you are to get through to that person.

Accordingly, don't come on too strong.  Make a couple points.  Plant those seeds and walk away.  Don't dare stand over the pot watering and singing gospel songs.  That might work for real plants.  It doesn't work for dipwads.  (Okay sorry.  Not really.).  Don't come on too strong--and then, this is important: give them a way to save face.

They might march around with their body armor and AR-15s and claim to be all tough and whatnot.  But body armor doesn't make a person tough.  Carrying a gun doesn't make a person tough.  What makes a person tough is doing appropriate and responsible things even when it's not pleasant.  Even when it might feel bad.  And the trumps are all about protecting their feelings, even if it means doing and saying the most irresponsible and inappropriate, just plain dick things imaginable.  So they are not tough.  They are not capable of standing up and saying, "I was wrong, I defended and contributed to the degradation of my country and my culture and support white supremacy" and so forth.  They are too weak for any of that.  If you force them to confront their past missteps in order to correct their future course, it's not going to happen.

Instead, you must give them a way to save face.  This means showing them a path to being right in the future that does require them to admit--expressly or impliedly--being wrong in the past.  There are many ways of doing this, we can get to those next.

Alright, so we know (i) we need to work on the trump's feelings, and (ii) we need to do it in a way that enables them to avoid any kind of pride ding.  Now we can look at some possible arguments that might accomplish this. This might not even be an exhaustive list, though I am pretty confident the underlying methodology is about the only realistic approach.

So how do you convince them?  Because things changed in 2020, when DT began slipping behind on the polls, of course.  Only then did he begin actively courting white supremacists, and sending overtly racist tweets, and demolishing civil rights laws. (I mean, this is false but whatever). So in 2016, when your trump was all aboard the DT train, the Nazis in back were just along for the ride. It's only now that DT is trailing Biden in his reelection bid that the Nazis get seats in first class--and that just goes too far.  So it's the tragedy of DT: a good man, desperate to serve his country, reduced to aligning himself with white supremacists in a vain effort to extend his term.  Sad, really.  But he simply asks too much.

"So many of these fucking people don't even get what Trump is really about, you know?"

So then they're in.  At least they think they're in--because they obviously do know what DT truly stands for.  They don't dare say it out loud because, you know.  That is, you obviously know and you think they know, and they don't want you to know that they really don't know.

You follow? Good.  That's also why they can't ask--because if they have to ask, then that can only means they don't already know, and that would make them just like all those other fucking people.  They might try to hint at asking, but you just give them the sharkface.  No, they weren't really probing for the secret of what DT is all about.  That would be weird.

So this fucks with them, and maybe gets them doubting or feeling superior to their fellow trumps, and really it's just worth fucking with them for fucking with them's sake. Does it plant seeds of doubt that might eventually change their minds?  Hell if I know.  But if not, hopefully it at least makes them feel bad.

Because fuck trumps. They're all dipwads.  Every last one.