Yeah, so, back in 2016 you might have heard some stories talking about how various GOP pollsters had given 45 a better shot than the stuff for public consumption—and maybe weren’t even surprised he pulled 270.   I guess they counted lawn signs or something, whatever.  Secret proprietary methods or some shit.  But I guess they were right, fortuitously or not, so what can I really say?

A couple polling firms in particular stand out in this regard.  One is a company called Rasmussen Reports, which was the only poll that correctly predicted Michigan would go red in 2016.  Nobody took them seriously, because Rasmussen started out as a George W. partisan shop and was known to have a strong GOP bias.  Rasmussen overestimated the support of Republican candidates in the 2010 midterm elections by nearly four points, and missed even bigger in 2012: Rasmussen had Romney leading Obama in the national popular vote and winning Iowa, Virginia, Colorado, and Florida—yet Obama carried each of those states won the popular vote by 4 freaking points (i.e., over 5 million votes).

But Rasmussen got Michigan right in 2016.  And while that’s just one state out of fifty, Michigan was a harbinger of the overall Rust Belt doom.  Michigan doesn’t happen without Ohio, Pennsylvania, or Wisconsin—and 45 doesn’t happen without all them.  So Rasmussen went around the twitters wagging its finger at the Nate Silvers that fall, and lingers as a source of doubt for 2020.

But why?  How?  What enabled Rasmussen to be right on Michigan in 2016 when so many others missed?  Did they have a superior methodology?  Or did they just guess and get lucky?

The 2018 midterms suggested the latter.   Heading into the midterms that year, every firm doing a national poll predicted a Democratic lead between 5-13 points, with most of them clustered at 7-9 points.  Except Rasmussen, that is—who had the Republicans ahead by a penny.

Well, as the other pollsters had largely predicted, the Democrats won the overall national congressional vote that year by over 8 points—the largest margin in decades.  So yeah, whatever, Rasmussen.  Broken clocks and whatnot.  Ain’t no better than the C+ rating Silver gives you.

Far more insufferable than even Rasmussen, however, is the polling firm Trafalgar Group, which is named after an early 19th-century sea battle but sounds like it should be the name of either a hedge fund or a collection agency or both.  Trafalgar’s head guy, Robert Cahaly, is an obnoxious rightward cheerleader who you can usually find on the likes of Fox News or worse banging his “social desirability” theory.  That’s basically the idea there’s all kinds of secret trumps out there who won’t admit it publicly but will scribble in his dot when they get to the voting booths.  Cahaly claims to adjust his polls to account for these incogcheetos and that’s how he gets numbers higher than the other polls.

What Cahaly is really doing, however, is padding his numbers to benefit 45, and using the shy trump concept as a convenient justification.  What actually happened in 2016 is that late-deciding voters broke heavily for 45, especially in key battleground states.  Actual social scientists have investigated the secret trump theory and found no evidence to support it.  If you've ever seen a trump, you know not many of them are inclined to be discreet about it.

If there’s no evidence, then whatever bump the Trafalgar polls are giving 45 because of it is purely arbitrary, of course.  But Cahaly don’t care; just the other day he was evidently on the Hawn Channity show or whatever they call it predicting four more years.

Like Rasmussen, Trafalgar’s unsound methods were exposed with spectacular 2018 failures as well—most significantly, a predicted 12% romp for 45 fan boy Brian Kemp in his Georgia gubernatorial race ended in a functional tie—with Kemp winning largely due to electoral shenanigans.  Perhaps they overestimated the number of shy Kemp voters?  Well, most people outside Georgia don’t even know about that.

Enjoy your C- rating, biyatch.  If it’s even still that high: 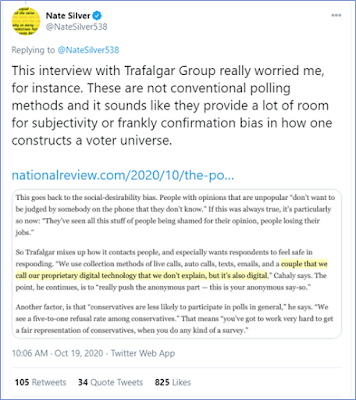 Okay, so now we’ve established that Rasmussen Reports and Trafalgar Group are both partisan boogeyman polls that we really shouldn’t be worried about—right?  Right?

Well, let’s just say, hypothetically, that Rasmussen and/or Trafalgar is actually worth a damn.  Then what are we looking at for November 3?

There are some other bizarre scenarios that might be possible but generally speaking, for 45 to win the election he must carry all of Arizona, Texas, oHIo, Georgia, Florida, North Carolina, Iowa, then either Pennsylvania or Wisconsin.  Or Michigan, but he’s not getting the Mitten without PA or Wisconsin so…okay okay we’ll include Michigan.  Go Blue.  Always Go Blue.

Here’s the current polling averages (which already includes the likes of Rasmussen and Trafalgar, BTW) for each of those states (per 270towin.com on Oct. 23):

If the election were decided according to these polling averages, Biden wins 350+ electoral votes even if you give Iowa to 45.  Okay, let’s see what Rasmussen’s and Trafalgar’s most recent polls have for these states.  We’ll start with Rasmussen:

Using the Rasmussen numbers, 45 picks up Florida and North Carolina for sure.  Rasmussen didn’t poll Texas, Georgia, or Iowa—but even if we assume 45 wins those too, that’s still not enough.  Partisan though they may be, Rasmussen still has Biden up in Arizona and all across the Rust Belt—significantly in Michigan, Pennsylvania, and Wisconsin, and even holding a modest 2% advantage in Ohio.  This maybe isn’t the landslide we want and need, but still gets the job done with a solid, 300+ EV margin.

One cautionary note on the Rasmussen numbers is that their most recent polls for Michigan and Wisconsin were all the way back on September 7—an eternity on the context of this race.  But an 8% lead is massive, and even if those states have tightened, they are unlikely to be much closer than Pennsylvania—where Rasmussen’s more recent polling still has Biden leading by 5%.

Okay, now let’s see what Mr. Cahaly has cooked up for us:

Sadly, neither Rasmussen nor Trafalgar has any polls for us in Iowa.  But since Admiral Nelson has a veritable 45 landslide going on everywhere but the Rust Belt, and also since we’re trying to reassure ourselves by giving the devil the benefit of every doubt, we of course presume it goes red.  All those states less Michigan put 45 up around 258 electoral votes (plus or minus some random one-vote districts in Maine and Nebraska), with the Mitten and its 16 EVs set to decide the race.  Somehow, despite Biden still winning in Pennsylvania and Wisconsin and 45 having gone on the Twitter warpath against Michigan’s governor despite some MAGAs having hatched a plot to kidnap her, Trafalgar has 45 crossing the Mackinac Bridge with a 0.6% margin.

Careful now.  Red sky in morning.  Those high winds will blow your shit right off.

I guess literally all the other polls could be wrong and Trafalgar could be laughing at us again in November.  Even Silver still gives 45 about a 13% chance of winning—though even much of that 13% chance reflects the possibility of various lightning strikes in between today and election day.  But until then we’ll just have to sweat it out.  There’s no damn boogeyman, just jackass pollsters who like to scare us with made up numbers.  It’s just you, Cahaly.  You and your broke-ass clock.