Guard your grill, Philly. And whatever the equivalent of that is in Phoenix.

If you’ve been reading my posts lately, or if you’ve been reading fivethirtyeight or WaPo or pretty much any other credible election analysis, you already know Biden/Harris have a major lead in the national polls and are on pace to win going away in the Electoral College as well.  But you also know the trumps are going to cheat like mad, and that you can’t have any confidence in the federal courts to correct any election shenanigans because even the 2000 SCOTUS failed to do so and things are much worse now.

Electoral cheating seems to defy any kind of meaningful analysis.  How can we possibly analyze the impacts of trumpchief when we don’t know what kind of cheating they are going to engage in, how they are going do it, or where?  Well, I propose we work backwards: find the most realistic ways cheating could deliver the trumps an electoral victory, and then figure out what approaches the trumps might take to produce those kinds of outcomes.

The first step in devising an illegitimate campaign strategy for a presidential candidate seems to be figuring out how far you can get with a legitimate one.  For 45, that appears to top-out somewhere between about 125 - 247 electoral votes; 45 can count on AK, ID, MT, WY, UT, ND, SD, NE, KS, OK, LA, AR, MO, MS, AL, TN, SC, KY, IN, WV, and then is in a dogfight for TX, IA, OH, NC, GA, and FL.  Thus, for cheating to stand a chance of helping you, it would need to deliver at least 23 electoral votes (i.e., enough, coupled with your 247 max from legitimate electioneering, to take the College).

Okay, so let’s see which states are left:

Together, this set of states holds 77 electoral votes—or more than three times the number of EVs needed to flip the election (from a 247 EV starting point).  So, what kind of shenanigans would 45 need to pull off in order to actually make that happen?

A few foundational points.  First, since we’re cheating the usual birds-of-a-feather reasoning (e.g, if candidate X wins a state then he is also more likely to win other culturally similar states) goes out the window.  That means, of course, that if the trumps steal Wisconsin, it says nothing about voters in Michigan, Pennsylvania, or Ohio.  It might suggest maybe that voters in the sister states prefer Biden, or the trumps wouldn’t have needed to steal the cheese state in the first place.  But that really just brings us to our second point: the trumps will need to decide in advance where to do their cheating, since if they were going to win a close state anyway they wouldn’t necessary know ahead of time.

Next, it’s noteworthy that nearly 70 million ballots have already been cast—a figure that represents more than 50% of the 130 million or so ballots cast overall in the 2016 election.  These early votes are believed to heavily favor Biden—by about a 3:1 ratio overall.  While there are some significant state-by-state fluctuations, by and large 45 is going to head into election day with a major deficit and will need people to be able to vote in large numbers.  The trumps already appear to be trying to reduce this advantage by preventing states from being able to actually count all those ballots.  But this still takes any kind of wholesale, “cancel the election” type of interventions—whether nationwide or in entire states—off the table.  Rather, the trumps will need to target their cheating on some specific places.  But which places would those be?

Since the trumps need to suppress Biden voting on election day while enabling their own voters to come to the polls, they need some way of being able to tell which ones are which.  The following chart is a bit dated (from August 2020), but points to a few key demographic differences: 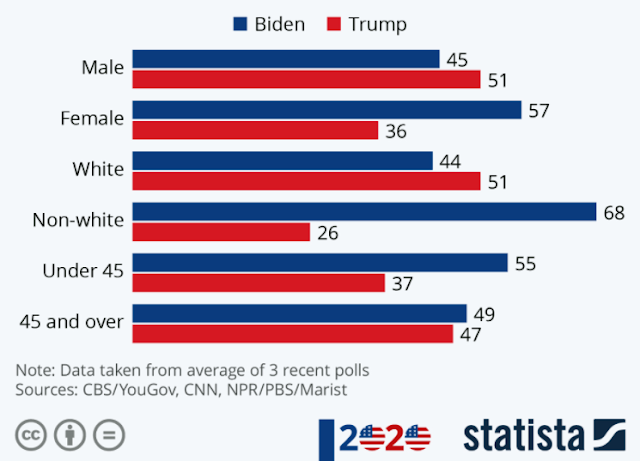 According to the chart, women also appear to favor Biden by over 20 points.  But that doesn’t do the trumps’ cheating plan any good because how are you going to keep women from voting while still allowing men to do so?

The chart also shows Biden with a large advantage among voters under age 45.  While this suggests the trumps could make some hay depressing voting on college campuses and other places heavily populated by younger persons, for the most part communities aren’t segregated enough by age to make a viable strategy out of this (especially since college students themselves often remain registered in their home towns, which may well be out-of-state).  On top of that, more recent evidence shows Biden is killing it with voters over 65—to the tune of a 27-point advantage.  Guess that’s what happens when you stop collecting the taxes that fund Social Security and Medicare.  So really, this means the sweet spot for the trumps are just the middle-aged voters (aged 46-64).  Good luck figuring out a way to cherry pick a group like that.

That leaves just one obvious approach from the chart above: race.  Nonwhite voters favor Biden 68-26, and among Black voters the margin is more like 84-10 and expected to wind up at least around 90% for Biden in the end.  So if the trumps can keep enough Black voters from rocking it on 11/3, then they might be able to steal the election.   Let’s have another look at the states where this strategy might be deployed.

In order to steal the election by keeping Black voters from the polls, the first thing you need to have is for there to be enough black voters in your state to close the gap you’re facing.  A few of these states are lily white places where that isn’t going to be the case.

For example, in 2016, New Hampshire’s voting age population was just under 1,060,000 persons—and just 1.4% Black.  So that’s about 15,000 potential Black voters in New Hampshire, a state Cheetchot trails 53%-43%--or about 107,000 voters.  So even if every single Black voter in New Hampshire favored Biden and the trumps successfully kept every single one of them from the polls, Biden still takes the state by roughly 92,000 votes.  Thus, cheating in New Hampshire isn’t likely to do the trumps any good—and with just 4 EV at stake, probably not worth he effort anyway.

A more typical example might be Minnesota, which has about 470,000 Black residents, or about 8.3% of the state’s 5.6 million population (of which about 4.3 million are of voting age).  Biden leads Minnesota 51%-42%, or about 387,000 votes.  So while the trumps could theoretically swing Minnesota by suppressing Black voters, the task looks damn near impossible.  Even assuming 100% turnout among Black voters, about 10% of them would be voting for DT anyway, so they would need to suppress more than 91% of the remaining 423,000.  And even though the vast majority of Black Minnesotans are concentrated in and around the Twin Cities, that would still require suppressing votes across a five-county area (Hennepin, Ramsey, Anoka, Washington, and Dakota Counties).

For the trumps to steal the election by suppressing Black votes, then, they need to do it places where two things are true: (1) there are lots of Black voters, and (2) 45’s deficit is small enough that suppressing a large portion of the Black vote could realistically change the outcome.  There appear to be two possible candidates on the list above: Arizona and Pennsylvania.

Arizona doesn’t have a very large African-American population—just about 5.2% of the state.  But with roughly 7.3 million people overall, that translates to about 380,000 people.  Among the voting age population, Arizona has 5.5 million total, about 286,000 of whom are Black.  But Biden’s lead in Arizona is slim—at the time of this writing only about 47.8%-46.4%.  That’s a margin of only about 77,000 voters.  What’s more, Arizona’s Black population is concentrated in Maricopa County—so the trumps would only need to suppress Black voting in one county to potentially flip the state.  Granted, Maricopa County is over 9,200 square miles (about the same size as Vermont)—but still.  Suppress voting in Maricopa County, and the rest of Arizona can carry the state for Cheetochet.

Michigan and Pennsylvania each have Black populations of around 1.4 million, with multiple Black population centers scattered around each state.  But while polls show Biden leading Michigan by about 768,000 votes, his margin in Pennsylvania is only around 360,000.  The City of Philadelphia alone has almost 650,000 Black residents—so suppressing the Black vote there could potentially change the outcome of the Pennsylvania race.  By comparison, the largest Black population center in Michigan is Detroit, with over 522,000 Black residents—not enough, by themselves, to cost Biden the Mitten if blocked from the polls.

Together, Arizona and Pennsylvania account for 31 electoral votes.  Were Cheetochet to steal both those states through illegal suppression of Black voters, he would take the Electoral College and wouldn’t even need Iowa to do so.  But how can the trumps suppress voting in a City as large as Philadelphia, or a county so vast as Maricopa?

I don’t know.  But the two most obvious possibilities appear to be (a) some type of military action or martial law declaration, likely based on some kind of public safety or national security pretext (“anitifa is invading us from the sky!”) or (b) unofficial action by militias and white supremacists to disrupt voting at urban/heavily-Black polling places.

Without any ability to rely on the courts, the most likely way to defeat these kinds of attacks would be through early and absentee-voting.  If the large majority of Black voters in Philadelphia and Phoenix have already cast their ballots by the time the Proud Boys or Trump's kidnap vans arrive, all that will be left to do is count up the votes.

Unfortunately, all of this points to a possible other strategy: that rather than focusing on race specifically, the trumps could look to suppress urban voters more generally—as they are more likely to support Democratic candidates irrespective of race.  This perhaps opens up more potential polling sites for violent trumps to target on election day—but at the same time, the call for such a paramilitary (or military) assault on democracy is probably more likely to succeed if focused on two specific locations (e.g., Philadelphia and Maricopa County) than against ambiguously diffused “urban” voting places.

That we must worry about any of this is, frankly, absurd and unacceptable.  But we do.  Vote early, Philly and Phoenix.  And protect the polls.