One of the key factors that enabled Cheetochet to overcome HRC at the end of the 2016 election was the large number of undecided voters that year: nearly 15 percent of the electorate, about three times the percentage in the 2012 presidential election.  The high number of undecided voters made predictions much less stable, and while nearly half of them (about 44%) ultimately either voted third-party or left the presidential line empty, the expected HRC victory did not materialize when those who did case a major-party ballot broke orange by more than a 2:1 margin nationally:

I've been thinking about what this dynamic might mean for 2020 lately, given Biden's solid leads in national and state polls and the sheer absurdity of being an undecided voter (especially this time around).  Obligatory.  But here's my basic postulates:Really this is just a more complicated way of saying that the more undecided voters in a state, the more likely the trailing candidate can come from behind on election day.  But it's worth sad pathetic fun making some effort to quantify this.  (And by "quantify," yes, I absolutely do mean "find a way to think about this that is not a depressing horror show").

So, using the polling averages at the time of this writing, we see that Biden is well into "safe" territory on the (meaningless) national popular vote with 52.0% (to Cheetochet's 42.9%) and is also over 50% in the District of Columbia and 22 safe states: California, Colorado, Minnesota, Virginia, Washington, Connecticut, Illinois, Massachusetts, Oregon, Rhode Island, Vermont, Hawai'i, New Jersey, Maine, New Hampshire, Maryland, New Mexico, Delaware, New York, Wisconsin (!), Pennsylvania (!!), and even Florida (!!).

Meanwhile, Cheetochet's base has a death lock on a bunch of traditional red states: South Dakota, Montana, Utah, West Virginia, Kansas, South Carolina, Alaska, Oklahoma (which is fake), Kentucky, Idaho, Mississippi, Nebraska, North Dakota, Tennessee, Wyoming, Louisiana, Missouri, and Alabama.  I don't know why we have any of these states.  Well, except Louisiana, they can stay.  But that's 18 altogether, good for 36 U.S. Senators (and corresponding EVs), even though their combined populations are about the same as California alone (2 Senators, one of whom SUUUCKS).  But Founding Fathers Fails are a post for another day.

The remaining states, in which the leading candidate is polling under 50%, are:

A couple of observations really jump out immediately from these polls.  Indiana is in play!  No.  But, let's look at what the electoral map looks like just based on the safe (i.e., leader polling at 50%+) alone: 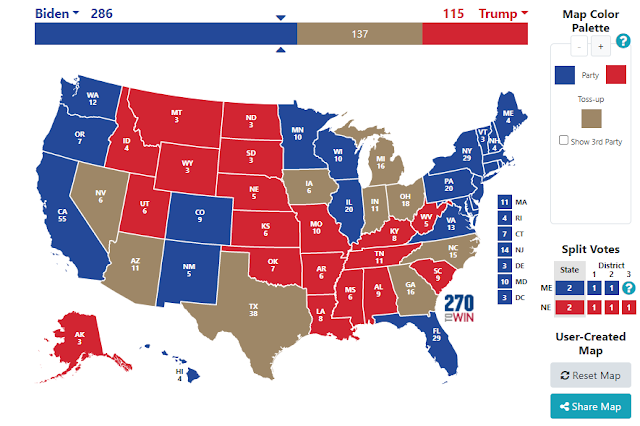 Well, what do you know?  Just the safe states alone are enough to put Biden over the magical 270 threshold.  The polls could be wrong, of course--but if they're not, then the only way Cheetochet can win is either by flipping Biden voters (😵) or keeping them from actually voting (😠).  Obviously he is going for the latter strategy, but again that's another post.
Still, 286 is close enough to 270 that Cheetochet would really just need to claw back one big state (e.g., Florida or Pennsylvania) or maybe a couple smaller ones (e.g., Wisconsin and Minnesota) to get back into position if he can repeat his 2016 performance in dominating the dimwits undecideds.  Too much strikethrough, I know.  Anyway Cheetochet got 37% of them in the last presidential to HRC's 18%, with the rest going to nobody (or to third-parties, which is the same thing).
To simplify the math, let's just assume that 50% of this year's undecideds vote for a major-party candidate.  What does the map look like if Trump takes 2/3 of them again?  Well, he'd win all the remaining states in which he is already ahead or that are tied, so we really just need to look at four states: Nevada, Arizona, Michigan, and North Carolina.
So that's still a clear victory scenario for Biden: 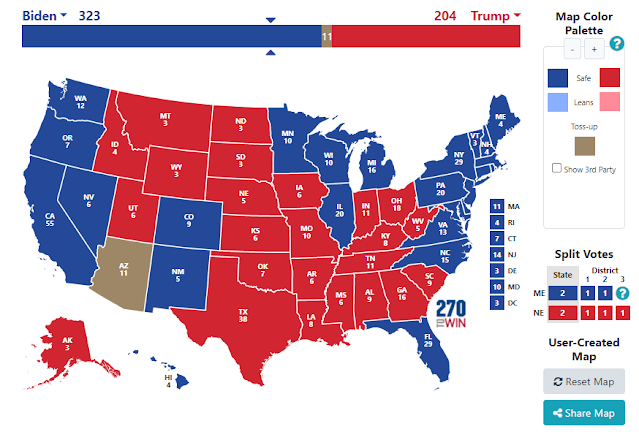 Conclusion: Trump cannot win in 2020 solely by taking the lion's share of undecided voters, and he probably can't even get close enough doing that to put victory within reach just by flipping one large state or a couple medium-sized states.