The 2017 Michigan Defense was elite by standard statistical measures.  The unit finished third nationally in total defense, allowed only 120.9 rushing yards per game, and ranked fourth overall in opponent passing efficiency.  And at times during the 2017 season, the Defense did indeed seem every bit that dominant.  But not always.  And standard football statistics are seldom reliable and often downright misleading. So that’s why you need to look at the advanced stats.

Here, the 2017 Michigan Defense still rates very highly—ninth overall in defensive FEI, tenth defensive S&P+, and holding the country’s #2 overall opponent success rate.  Top-10 (out of 120 FBS teams) is still “elite” by most reasonable definitions, even if perhaps a shade below the dominance suggested by the standard statistics. And that feels a little more on-point with the eye test, though ultimately saying M had the ninth-best or tenth-best defense in 2017 still doesn’t quite capture it. 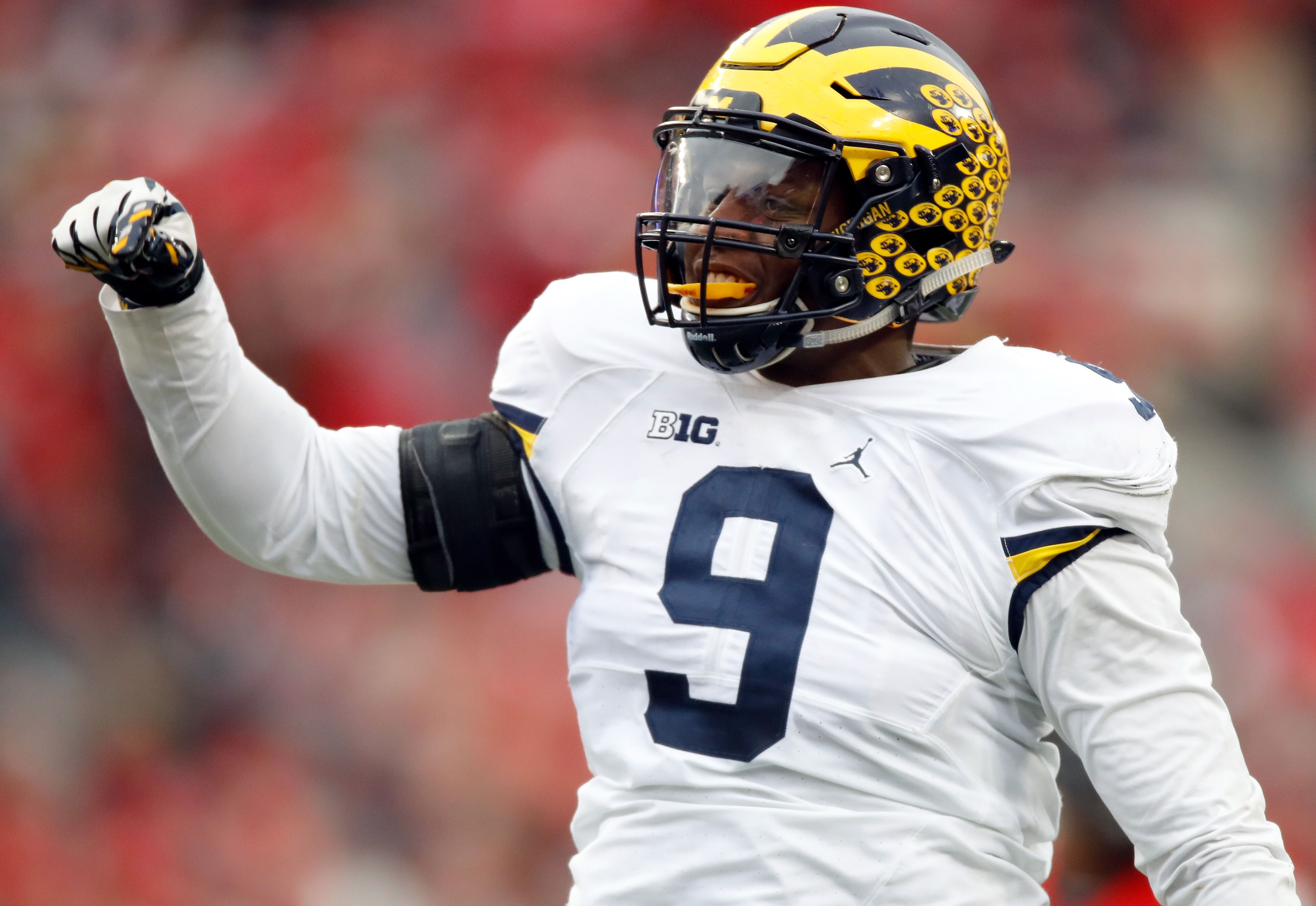 What does, I think, is to say that Michigan’s 2017 defense was generally quite formidable, but limited by a couple of key vulnerabilities.  Most opponents proved unable to take advantage of those Achilles’ heels and were mercilessly crushed at the hands of Don Brown and his minions. But the few teams that could capitalize on Michigan’s soft spots found varying degrees of success.

One of Michigan’s major defensive shortcomings in 2017 was an inability to consistently defend vertical passes to slot receivers, a problem that will be covered in an upcoming post on safeties.  The other was Mike McCray in space.

Now, let me begin by saying that Mike McCray was, overall, a very good player for Michigan who filled a much-needed role at WLB after Joe Bolden and Desmond Morgan graduated and left a giant, flashing ?at the position heading into 2016.  My take on McCray then was competent and physical, and I dare say he generally lived up to that billing in his time as a starter.  He excelled as a run defender and performed exceptionally well against north-south offenses like Michigan State and even Ohio State.  He was also a team captain and thus undoubtedly contributed leadership and other intangible benefits to the program as well.  But man, did McCray struggle badly at times covering releasing backs in space—especially on the accursed wheel routes.

As is the way of football, once opposing offensive coordinators detected this weakness, those with the ability to exploit it (e.g., those having speedy RBs with receiving chops) did so over and over and over and over again.  Probably on account of this critical flaw in his game, the NFL passed on McCray in the 2018 entry draft—and though McCray signed a free agent contract with the Dolphins, he announced his retirement (likely from playing, but leaving the door open to a coaching career) before training camp opened this summer. 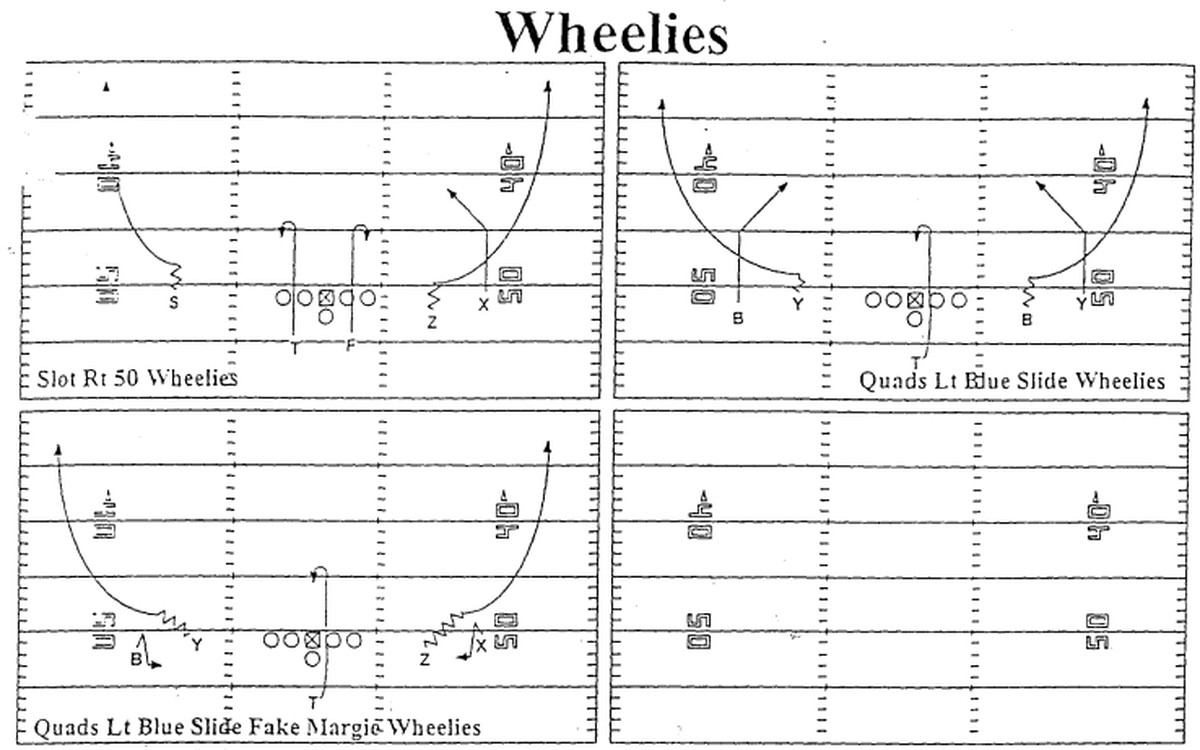 As for the Michigan Defense, McCray’s departure re-opens that void at WLB that #9 himself filled two seasons ago.  But back in 2016, the only real candidates to fill that hole were unproven positional misfits like Noah Furbush or Jared Wangler, some true freshmen, Mattison’s old hat rack, a warehouse dolly, and McCray.  Though some indications made McCray the natural favorite—being he was a former 4-star recruit from power Ohio high school program Trotwood-Madison and the son of Ohio State star Mike McCray, Sr., and the right size and shape for the position—he had also suffered a significant knee injury earlier in his career and hadn’t even seen the field on special teams in 2015.  Nobody outside the program really knew whether McCray still had it, until he served notice by thumping fools in the 2016 spring game. Things are different at WLB now.  As the team heads into fall camp, at least four (non-true freshmen) players will vie for the starting nod at the open WLB position, possibly as many as six.

The three most likely candidates are probably Furbush, now a fifth-year senior with experience in 32 games and seven LB starts, redshirt sophomore Devin Gil, and true sophomore Josh Ross.  Furbush saw extensive action last season as an outside linebacker in Michigan’s 3-3-5 stack package, where he was probably best known for being the guy who leapt on the free ball in the end zone to seal the Florida game after a Chase Winovich strip-sack.  At 6’5” and nearly 240 lbs., Furbush played a versatile role—blitzing frequently, lining up as an end, dropping into coverage.  But his main role seemed to be occupying blockers so as to keep Michigan’s star middle linebacker, Devin Bush, Jr., free to wreak his sideline-to-sideline terror.  While Furbush’s best position fit is probably as a Jake Ryan-style SAM linebacker, his game isn’t much different from McCray’s (for better or for worse).

Josh Ross is essentially a bigger-and-faster version of his older brother (and four-year M starter at WLB) James “Biggs” Ross—a fierce and instinctual run defender with the athleticism to succeed in space.  Ross could provide a talent upgrade to the position, but this would come at a significant pricetag in terms of experience.  Ross did get into all 13 games last season, but most of his action was limited to special teams—and as we saw in the McCray clips above (not to mention over several seasons of Jonas Mouton), no amount of athletic ability can compensate for late reads, false steps, and wrong angles at the linebacker position.

The third candidate, Devin Gil, committed to Michigan as a 206-lb. safety back in 2015, part of the Flanagan High School trio of Gil, Josh Metellus, and Devin Bush Jr.  Though Gil had been previously committed to Miami (Fl.), which should say something about his physical ability, the recruiting sites had listed him as an anonymous two-star player and he was widely-believed a pot sweetener signed to draw Bush up north.  So lots of people were surprised to see Devin Gil on the field in the season opener against Florida last season, looking like a competent linebacker.  He went on to play in all 13 games, and Don Brown has since deemed Gil a “dude” (Don Brownese for “significant contributor”).

So that’s already three plausible choices, and then there’s pass-rush specialist Josh Uche.  While Uche probably fits best at a traditional SAM position or possibly as a small WDE, Michigan doesn’t really have a SAM in its defense (and instead has the Viper position, manned by Big Ten DPOY candidate Khaleke Hudson) and is pretty well-stocked at WDE as well (with another Big Ten DPOY candidate Chase Winovich starting and several highly-touted reserves). So Uche has reportedly been practicing at WLB (and probably other places as well) in an effort to get him onto the field.  That’s because Uche has the uncanny ability to “dip & bend”—that is, to beat pass protectors around the corner on a speed rush, then curl around them to the QB at just the right depth.  Used effectively, Uche could be a sack machine—but on the flip side, Uche also has yet to show he can be an effective run defender or handle any kind of pass coverage.  Until he does, Uche ‘s utility may remain limited to obvious passing downs

Especially with the 2018 Michigan Spring Game having been canceled for inclement, weather, trying to guess which of these guys[1]is on top of the heap at WLB would be a futile exercise in hubris.  But it’s quite logical to expect at least an even performance from the WLB position in 2018—and probably a slight upgrade over McCray.

Probably the guy you most want to see as the WLB starter is Josh Ross.  Gil and Furbush are both proven contributors, but neither is likely to emerge into a bona fide star.  Ross could, as the player who brings the most complete physical package to the role.  Just getting snaps means he’d have earned some measure of trust from the coaches; if he passes both Gil and Furbush for the starting gig then he’ll have really proven something on the mental side of the equation, especially considering the guys he’s competing with.

But while Ross is the player you ultimately want to see, he’s also a true sophomore with very little defensive experience.  So, chances are he won’t start in 2018 and if he does, it probably won’t be until later in the season.  And that’s fine, because both Gil and Furbush are fine.  All three players are likely to see a significant amount of action regardless, and Uche will undoubtedly get his share of passing down snaps.

There is little question as to will be manning Michigan’s other inside linebacker position in 2018. Sophomore Devin Bush Jr. thundered onto the scene with two sacks against Florida in Michigan’s 2017 opener and never looked back, posting 9.5 TFLs on the season and finishing as the coaches’ selection for All-B1G first-team, a Butkus Award finalist, and a second-team Associated Press All-American.  NFL.com named him the top LB prospect to watch in 2018, and CBS Sports projects him as the #3 ILB and a second-round draft pick. Get ready to watch Bush wreck more offenses in 2018, because he unfortunately might not be around A2 much longer. 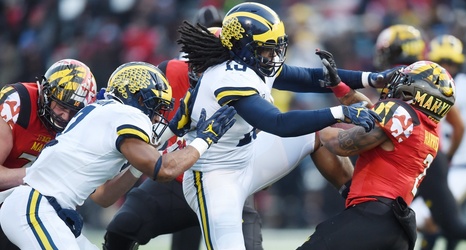 What makes Bush so good is an uncommon ability to attack at full speed, yet remain under control and change direction as needed. QBs simply cannot sidestep Bush as they can with most rushers.  Bush is also a phenomenal sideline-to-sideline defender, with very good closing speed, and effective coverage skills.  His athleticism and total package of skills, coupled with the advanced football I.Q. that comes from being the son of a seven-year NFL player who was also your high school coach and now lives with you and is an analyst for your college team, makes Bush a leading candidate for defensive player of the year in the Big Ten.

Despite his outstanding season, Bush was not a finished product in 2017.  He struggled with misdirection and could get overpowered by blockers when his defensive linemen (and Furbush, whom mgoblog called “Bush’s fullback”) were unable to keep him clean.  I would not expect Bush to exhibit those same shortcomings in 2018.

As for Bush’s backup, look for Michigan to get game reps for a couple freshmen in the (sadly, probable) event of an early Bush exit.  The first one is Drew Singleton, a top-100 recruit out of the same Paramus, N.J., pipeline that brought Jabrill Peppers and Rashan Gary to Ann Arbor.  Singleton tore his ACL as a high school senior, redshirted in 2017, and then the Spring Game was canceled—so there isn’t much to go on with him but scouting reports and high school film.  He’s got more traditional LB size, at 6’2” and headed for ~ 235 lbs., and looks to be more of a thumper in the Mike McCray mold.  The other is true freshman Cameron McGrone, another five-star from Indiana whose game is more in the Devin Bush rocket-missile category.  Since these reps are largely about 2019, though, don’t look for Bush to come out in a competitive situation.  Don’t be surprised if a guy like Gil or Furbush turns out to be the guy who comes in for Bush in the event of injury, targeting suspension, or other tragedy.

Bush is already an established B1G star, and will look to make first-team All-American and improve to a first-round draft grade.   The WLB position should be solid, if unspectacular, and there is plenty of overall depth.

[1]In addition to these four guys, two other linebackers could potentially get into the mix for WLB. One is Drew Singleton, a borderline five-star recruit at the MLB spot, who will be discussed below.  The other is another highly-touted prospect, Jordan Anthony, who is likely slotted for Khlaeke Hudson’s viper position and will be discussed in with vipers.