This common mark of rushing production carried little significance for Michigan running backs in past eras, who could realistically be expected to eclipse 1,000 yards by around the seventh or eighth game.  Since 1970, four Michigan backs (Mike Hart, Anthony Thomas, Jamie Morris, and Tyrone Wheatley, plus Denard Robinson who I am not counting because he did it at QB) have finished their careers with more than 4,000 yards and eighteen have finished with at least 2,000 yards.   School-record holder Tim Biakabatuka put up 1,818 yards in one season alone (1995), while Chris Perry won the Doak Walker with 1,674 yards in 2003—only the fifth-highest rushing total in Michigan history.  One thousand yards?  For any of these guys, a 1,000-yard season would have been a disappointment.

Since Mike Hart graduated after the 2007 season, a Michigan running back has broken the 1,000-yard barrier precisely once.  That happened in 2011, when Fitzgerald Toussaint edged over the mark with 1,041 yards. But in the other nine seasons since ’07, Michigan has had dreadful rushing offenses (2008, 2013-14), one outstanding rushing offense (2010), and plenty in-between.  So, does having a running back hit the 1,000-yard milestone really even mean anything? 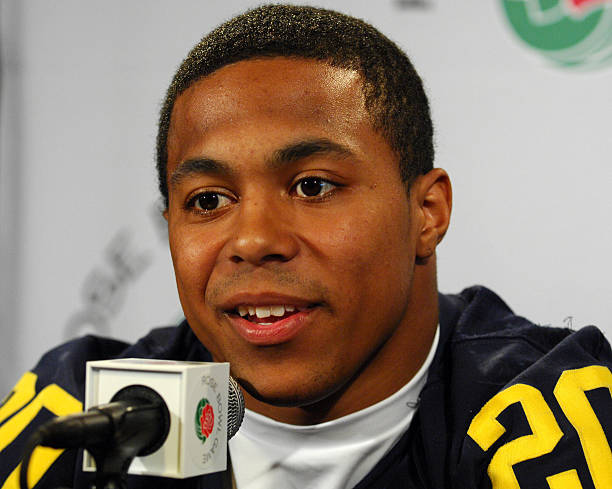 In 2008, 2013, and 2014, Michigan did not have 1,000-yard rushers because its offense was generally atrocious.  So one could perhaps deem a 1,000-yard running back as a proxy for “rushing offense not atrocious,” that perhaps makes some sense.  But that seems to be about as far as the statistic can be taken.

In 2010, Michigan did not have a 1,000-yard running back but the quarterback (Denard Robinson) ran for an incredible 1,702 yards.  Michigan’s top two running backs that year (Vincent Smith and Michael Shaw) combined for barely over 1,000 yards between them (1,003 to be exact), and it took them 211 carries—a pedestrian 4.75 ypc average.  Yet the 2010 rushing offense was nationally elite, ranking  #13 nationally in rushing yards and #8 in total offense.  A more middling example comes from 2009, when no single running back carried the ball more than 96 times (Brandon Minor).  The top three running backs by carries that season—Minor, Carlos Brown (81), and Vincent Smith (48)—accounted for 1,258 yards on 225 carries (5.9 ypc), which compares favorably with Hart’s 1,000-yard season in 2007 (1,361 yards on 265 carries, or 5.1 ypc).  And that’s without taking into consideration an additional 600+ yards from the quarterbacks (Tate Forcier and Denard Robinson).

Another counterpoint comes from Jim Harbaugh’s 2016 and 2017 offenses.  Quite the opposite from the Denard-run spread & shred, the Wilton Speight-led 2016 offense netted a whopping -29 yards rushing from the QB position.  Yet the team rushed for 213.3 yards per game—very respectable production at #32 nationally.  But that team’s leading rusher, De’veon Smith, had just 846 yards on the season. This time, the carries and yards hadn’t gone to the quarterback, but to other running backs and even wide receivers—Smith was one of six Michigan players with at least 100 rushing yards that season, and one of ten players with at least 10 carries.  Michigan didn’t spread the rushing offense around quite as much in 2017, with the top two backs (Karan Higdon and Chris Evans) splitting 299 carries between them.  But Higdon’s team high 164 carries still paled in comparison to the 220+ carries a Carr-era feature back could expect in a season, and thus Higdon didn’t break 1,000 yards even though he posted a stellar 6.1 ypc average.

All this suggests the reasons M did not have a 1,000-yard RB in the Rich Rodriguez era and has not yet managed to produce one in the Harbaugh era have had more to do with scheme, philosophy, and supporting cast than running back skill.  Rodriguez’s scheme featured a large number of QB runs and divided carries among multiple backs.  Harbaugh uses few QB runs but divides carries among even more running backs—and has also faced limitations with the quality of his offensive line. So it shouldn’t be surprising that the only coach since the Carr era to produce a 1,000-yard RB was Brady Hoke, an old guard loyalist who clung to the philosophy of feeding a single featured running back.  Toussaint posted his 1,041-yard campaign in 2011 on 187 carries—or 137 more carries than the next highest rusher (Vincent Smith, with 50 carries).  And even then, Denard outshined Toussaint with 1,176 rushing yards from the QB spot that season.

This tour of the recent evidence leads inescapably to the conclusion, then, that having a 1,000-yard rushing season is a completely arbitrary number with little meaning for a running back—especially one who plays for a coach who rotates multiple backs and spreads carries around.  Indeed, were football fields measured in meters rather than yards, it does seem likely a “1,000-meter season” would become the comparable standard, even though such an accomplishment would require nearly 1,100 yards.  So there is really no reason any actual, college football-playing running back ought to attribute any genuine significance to having a 1,000-yard season.  And that’s why I was a little taken aback earlier this summer when I saw this quote from Karan Higdon at the Big Ten media day:

Higdon was indeed very close to reaching 1,000 yards in 2017.  He finished with 994 yards, just one more carry from 1,000 at his 6.1 ypc average.  It wouldn’t have meant anything, really.  But Higdon is the most complete running back on M’s roster.  If those last six yards would truly have prompted him to declare early for the NFL, then 1,000-yards would have meant a great deal indeed.

Higdon came to Michigan from Sarasota, Fl., in the 2015 class, a late flip from Iowa who Harbaugh signed after touted Cass Tech RB Mike Weber opted for Ohio State.  Not many had high expectations for Higdon, a three-star prospect ranked just inside the top -500 on the 247 Composite.  But he got his feet wet as a true freshman, matured into a significant contributor with 72 carries as a sophomore, and then established himself as Michigan’s top standard running back with his breakout 2017 season. Now that he’s back for his senior year, Higdon looks to take what’s already been a solid college football career and put the exclamation point on it.  One thousand yards?  Sure.

After all the years of watching various M backs run straight into piles or rival The Matrix for their ultra-slow motion effects, Higdon’s a breath of fresh air.  He runs north-south, keeps his shoulders square to the line-of-scrimmage, and finds the freaking daylight.  He  runs violently,and makes tacklers pay.  Higdon has plenty of speed, and his best trait is probably the quick acceleration that enables him to probe small creases and then suddenly explode into the second level for big gainers.  He’s even shown some hands, some protection chops, and some improvisational skills in the passing game.  All in all, Higdon’s a legit player, and more than adequate Big Ten back.

What Higdon is, not, however, is large.  Listed at just 189 lbs. last season, a good 25 lbs. lighter than the average NFL running back (214.9 lbs), turning pro this spring could have been a disastrous decision for him because NFL scouts like their measurable and that’s a big one Higdon didn’t have.  So he smartly stayed in school and hit the weights hard this past off-season; Higdon rolled into fall camp listed at a cool 202 lbs., and the photographic evidence did seem to corroborate. 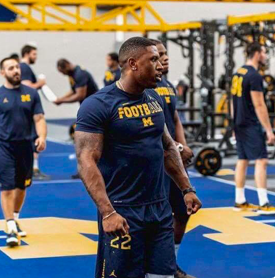 So while Higdon still may not beast out the yards like De'Veon Smithbefore him, hopefully we’ll see him run with a bit more power in 2018, get his 1,000 yards, and hear his name called at the 2019 NFL Draft.

Higdon’s still not going to get 225 carries though—probably not even 200. That’s because Michigan has another proven back on the roster, junior Chris Evans.

Evans came to Ann Arbor in 2016, carried the ball 88 times as at true freshman, and put Michigan ahead of Florida Statewith 1:57 remaining the Orange Bowl (the Peppersless defense couldn’t hold it, but that’s another story).  This impressive debut had many expecting Michigan to feature Evans as their main RB in 2017.  That didn’t exactly happen, but Evans did get over 150 touches (135 rushing carries and 16 receptions), and he and Higdon formed a solid 1-2 punch.

Evans’ game is built on three key components: speed, elusiveness, and versatility.  With both a quick initial burst and a breakaway top gear, Evans has the ability to beat defenders around the corner and the wheels to pull away when he gets a step.  He’s hardly a physical runner, but is shifty and hard to tackle.  Defenders rarely get a clean shot on Evans, and he does have a bit of a stiffarm when he needs it.  But he prefers to juke or jump cut or jab step his way down the field—or just jump right over that ass.  A true all-purpose back, Evans will run outside, he’ll run inside, he’ll dive over a pile at the goal line, he’ll go out for a pass, he’ll give the QB a checkdown option.  He does it all, he does it well, and now he’s an upper classman.  Can you say two 1,000-yard running backs?  If you count Evans’ receiving yards, then probably, yeah. Just as long as he doesn’t turn pro because of it. 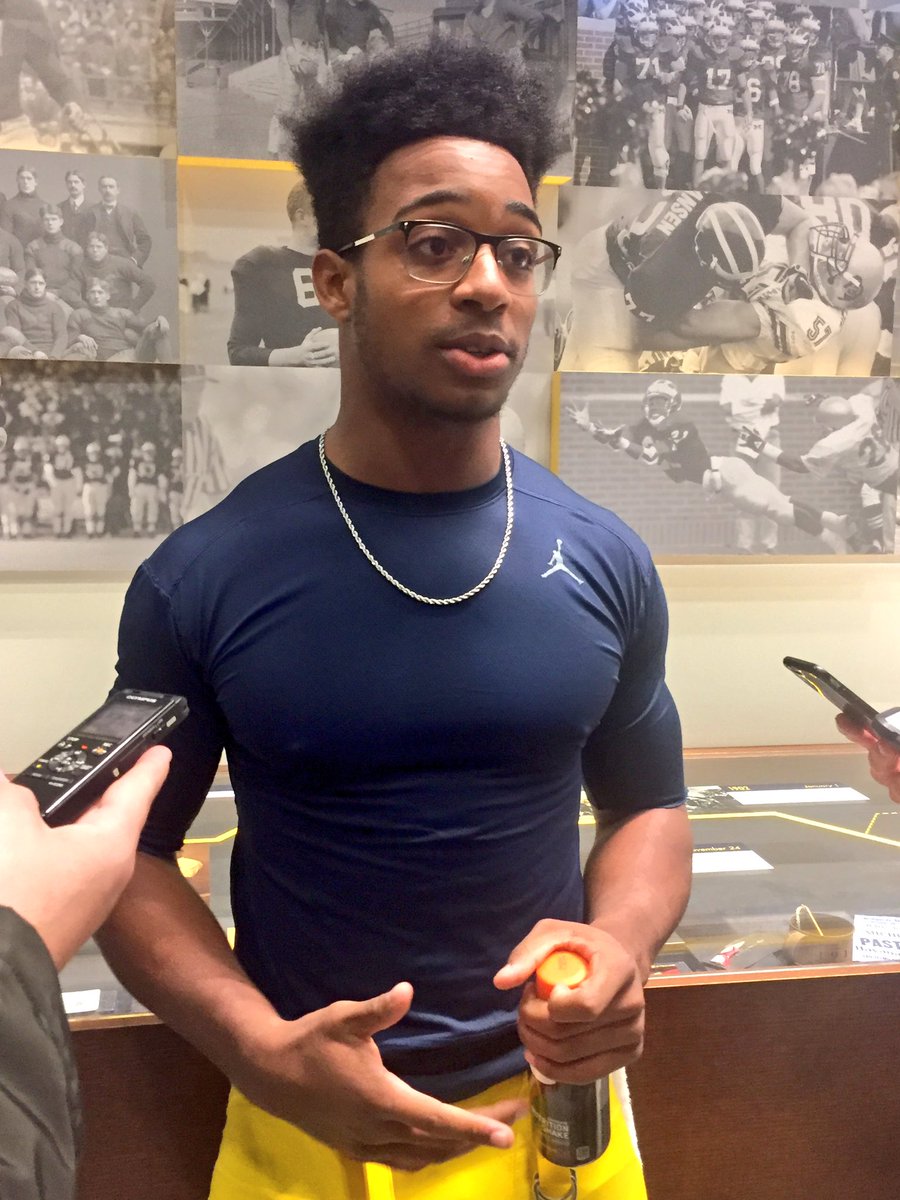 With Higdon and Evans as proven commodities, probably the only real question pertaining to Michigan’s running backs this season is, which of several young RBs will emerge as a viable third option and likely replacement for Higdon in 2019?  That answer was supposedto be Kareem Walker, the former 5-star New Jersey running back who famously committed to Ohio State during halftime of the 2014 national championship game, only to later flip to the Wolverines.  But Walker struggled with injuries and the academics at Michigan, and despite showing a good deal of promise in limited action never surmounted the off-field obstacles.  He’s left the Michigan program, and we wish him well in future endeavors—but we still need to find a new back.

That back could be sophomore O’Maury Samuels, a Higdon-like ball of muscle who dipped his toe in the pool of Big Ten football with eight carries last season.  Granted, he managed just13 yards on those carries and generally looked like he didn’t belong.  But the same was basically true of Higdon when he was a freshman (19 yards on 11 carrries, and a very poorly-timed slip & fall in the dying minutes of the 2015 Michigan State game).  Samuels supposedly hulked up from 192 to 205 lbs. over the off-season—if that’s true, then together with another year of acclimation Samuels is a good bet for 60+ carries and an eye to starting in 2019.

While Samuels works on becoming Karan Higdon 2.0, three true freshmen arrive in Ann Arbor this fall with great aspirations of their own.  Hassan Haskins is bigger prospect M hopes to develop into an A-Train type.  Christian Turner is another smaller back who looks destined for the Higdon track.  And then there’s Michael Barrett, one of the more intriguing prospects Michigan has signed in recent years.  Barrett is a highly-regarded athlete who chose M over an offer from Georgia Tech to play QB in their triple option, and at 6’1’ and 224 lbs., he already brings good size to the position.  But Barrett played QB in high school, and may have a steeper learning curve in terms of footwork, blocking, receiving, and other non-ball-carrying RB duties.  Even so, he remains EGD’s pick as the most likely contributor among the three freshman backs.

Probable starters: Karan Higdon, Chris Evans
Key backups: O’Maury Samuels
Other possible options: Michael Barrett, Hassan Haskins, Christian Turner, Kurt Taylor, Tru Wilson
Position grade: B+
Michigan may not have one back as good as Wisconsin’s Johnathan Taylor or Ohio State’s J.K. Dobbins. But Higdon and Evans are two quality college running backs, and both are upper classmen who should add poise, leadership, and consistency.  M lacks quality depth behind them, but should at least be able to find a role-player for a third RB spot from among the various available candidates.